Angry Birds Teams Up With Green Day For Some Reason 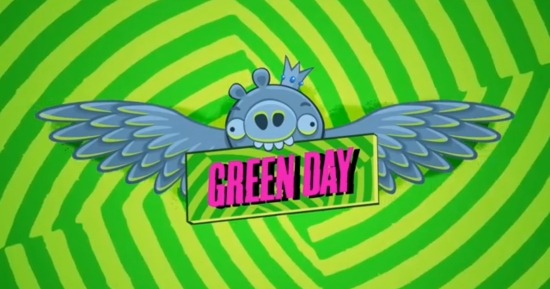 Just when you thought that, maybe, possibly, the Angry Birds craze might’ve died down just a little bit ever since the titular birds with emotional problems went to space, they team up with one of your favorite bands from your days in middle school. For some reason, a Green Day expansion to Angry Birds is now a thing that exists in an official capacity. However, for a band whose best song (as far as I’m concerned) is about duct-taping explosives to oneself and going kamikaze on a room full of people (probably metaphorically?), teaming up with a game about birds that go kamikaze on some pigs could be argued to make some amount of sense.

The new episode of the game features ten new music-themed levels, and sports new pig enemies that are modeled to look like members of the post-post-post punk band. The game includes Green Day’s newest single, “Oh Love,” as well as new song “Troublemaker,” not to be confused with the Weezer outing of the same name. Green Day singer and front man, Billie Joe Armstrong, praised the casual game of birds committing suicide to take down some pigs, “We’re all fans of Angry Birds. It’s such an addictive game that when we first started playing we couldn’t stop. Go Team Green!”

This isn’t the first time Green Day has lent their talents to video games, as Harmonix entered the music gaming genre’s “specific band expansion” war with an all Green Day version of Rock Band.

If you’re worried that your favorite casual bird suicide simulator and post-post-post punk band mash-up will go stale quickly due to supporting only ten levels at launch, Rovio has said the episode will receive updates sometime in the fall. Currently, the odd collaboration is only available on Facebook, but with Angry Birds being on everything ever, one can only imagine Rovio would have no problem bringing Green Day and suicidal birds to other platforms if there was a market for it. Check out a quick trailer for the odd mash-up below.