Amma Asante Responds to Backlash Toward Her Upcoming Period Film, Where Hands Touch 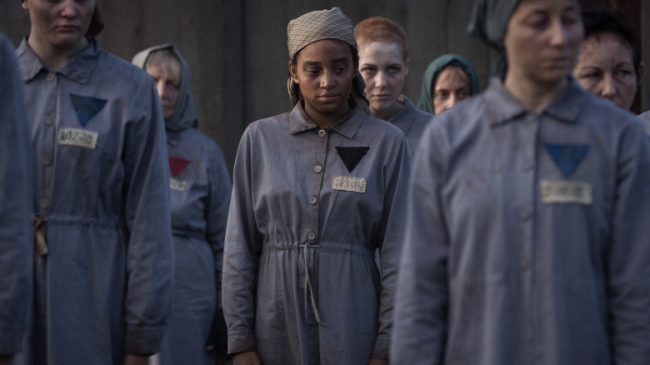 Piggybacking on the hype surrounding director Amma Asante’s current film, A United Kingdom, which is now in theaters in the U.S, we’ve been getting information about her next, Where Hands Touch, which is currently in pre-production.

Last week, Asante’s Tantrum Films released a first glimpse photo from the movie, featuring its star, Amandla Stenberg, alongside her co-star, George MacKay. The response to the photo, as well as the details of the plot made a lot of people uncomfortable, as well as angry. From our very own comments section to the wide internet, people expressed concern about everything from a woman of color being depicted alongside a Nazi Youth in a romantic image to Jews being written out of a Holocaust story.

Over at IndieWire, Asante has released a new image from the film (see above) along with a statement expanding on the concerns expressed. Here it is in full:

“This week, a First Look image of the film I have made starring Amandla Stenberg was released, and it revealed all sorts of concerns, questions and worries with fears on what this film will be about. My passion has been to shine a light on the existence of the children of colour who were born and raised under Hitler. These children were also persecuted and my wish has been to explore how Black and Bi-racial identity was perceived and experienced under Nazi facist rule. The young girl’s experience in ‘Where Hands Touch,’ sits alongside the Jewish experience and the experience of others who were persecuted. It looks at how Germany became Nazi Germany and ‘slept walked’ itself into a disgusting and murderous state that resulted in it killing its own people and those of other countries.

Leyna’s story (Amandla Stenberg) is told in this sad and terrifying context. My reasons for making this film sit around my concerns of the current climate but also a continued and growing intolerance of racial and religious difference, that we all have sensed for many years and which is becoming even worse now. As a filmmaker, my wish is to center on bringing attention to this through my work.

Amandla and I teamed together to shine a light on the hatred that Nazi Germany visited on Europe and to make a film that might contribute to the dialogue of how we fight this horrific racial and religious ignorance today, along with the intolerances visited on the many other marginalized groups and intersections.

With only a few lines and one image ever offered to a filmmaker to comment on when a First Look image is about to be released, and with the lead character in this film embarking on such a large rites of passage story, it is difficult to summarize all the things one might want to about a film in a brief article. Amandla’s role as a sixteen year old in this film brings attention to an, as yet, untold story in the arena of drama cinema, to the existence of the other ‘others’ who suffered during the holocaust. This does not mean that the Jewish experience is not also key to our story. It is.

When, as a 17 year old member of the Hitler Youth (compulsory since 1936), George MacKay’s character discovers exactly what his country is and what it stands for through learning the truth of what is happening to Jews and then to Leyna as she is thrown into a camp system, he rejects the doctrine and challenges his father’s belief system.

I hope that this at least clarifies concerns as you encounter the image of this German girl of color being raised in fascist Germany. I have all the respect in the world for those who have enjoyed my films thus far and i would never make a movie that glorified, glamorized or romanticized hatred and murder in any way. On the contrary, I want to explore the voices of the marginalized. By exploring the experiences of yesterday we can hopefully be better prepared when ugliness heads our way today. Sending you all, love and light.”

When I put together a video retrospective of Asante’s work as part of our From Indie to Blockbuster series, I focused on the fact that Asante’s approach to issues of race, class, and culture have always been historical, but have never been typical. From her first film looking at racism from the point of view of racists to her second film telling a love story involving a black woman in 18th Century England who was raised as an aristocrat, Asante never looks at things the way we’re used to them being looked at in film. I would venture to guess that Where Hands Touch is yet another example of this.

I’m particularly heartened by the detail provided regarding the Hitler Youth character and how he rejects the Nazi regime once he learns exactly what its ideology means for the people of Germany. He seems to be a sad example of something that we’re all too familiar with even in this country—a child, taught to parrot patriotism, who then learns the entire truth of what their government is capable of and realizes that love of country needs to be more nuanced than mere blind support.

Meanwhile, Amandla Stenberg, who is half African-American and half Danish, also issued a statement about the backlash the film has received based on one image and a blurb of a synopsis:

One thing is for sure: This film is going to be starting a lot of conversations about some very important topics. What do you think now that you have more information? Are you interested in seeing this film?