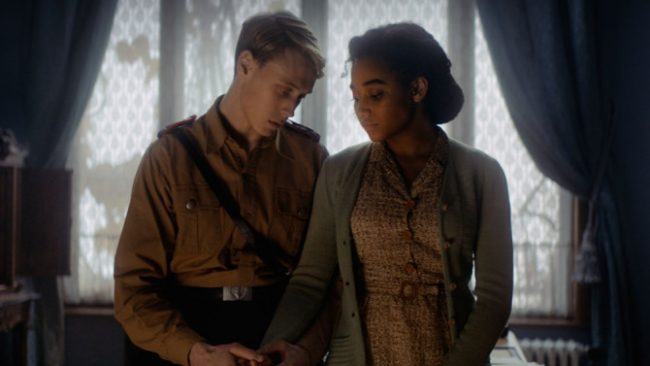 You may have caught how excited I am about writer/director Amma Asante’s upcoming film, Where Hands Touch, in my most recent From Indie to Blockbuster video about Asante’s life and career. Now that the film has wrapped and is in post-production, Asante’s Tantrum Films has released a first image from the film, which you can see above.

Where Hands Touch stars Amandla Stenberg as Leyna, the 15-year-old daughter of a white German mother and a black father. She stars alongside George MacKay, who plays Lutz, the son of a prominent SS officer, and a member of the Hitler Youth. The two, according to a statement from Tantrum films, “They fall helplessly in love, putting their lives at risk as all around them the persecution of Jews and those deemed ‘non-pure’ slowly unfolds. Does their love stand a chance amidst violence and hatred?”

According to Variety, Asante has this to say about her upcoming project:

“It has been a passion of mine to tell this story for many years — to shine a light on the existence of German children of color who were forced to grow up under Hitler’s rule, labelled as ‘Rhineland bastards.’ Against this historical backdrop, Leyna and Lutz enter a rite of passage negotiating the path to true identity in a society that has turned in on itself and is eating its own tail. Completing this film brings together everything I am as filmmaker.”

Asante’s films are fascinating, precisely because they are historical. In Belle, A United Kingdom, and Where Hands Touch, we get to explore actual, real-life parts of history that just…have never really been talked about before. Even in her first film, A Way of Life, Asante’s story was drawn from much of her lived experience growing up in London. So, to anyone that would make excuses for there not being many people of color in period films, her films retort Um, people of color didn’t just magically appear after #OscarsSoWhite. We’ve always been here, and here’s the proof in stories that are rarely told.

While we still have a wait for Where Hands Touch, you can check out Asante’s A United Kingdom, which comes out in the U.S. TOMORROW!

Will you be checking out Where Hands Touch when it comes out?