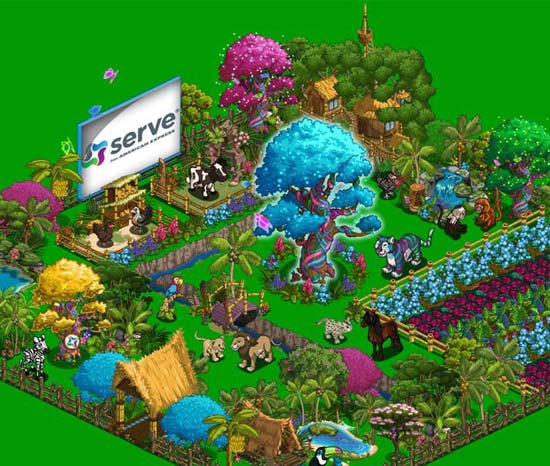 Zynga’s hit Facebook game FarmVille is poised to stretch its tentacles deeper into your wallet in a new deal with American Express. The credit card company is now offering pre-paid cards attached to their Serve rewards program that will earn FarmVille players in-game cash for real-life purchases. Strap yourselves in, as our reality becomes a little bit more like a Philip K. Dick story.

The pre-paid cards are available now through Amex’s Serve website. According to All Things D, getting the card to work with your FarmVille game requires the kinda-cool kinda-creepy step of actually planting a Serve money tree in your Farm. From their report:

First, FarmVille fans that visit the Serve farm will be prompted to plant a virtual Serve Money Tree on their farm. Then, they can register to receive a Zynga Serve co-branded prepaid card in the mail. Next, they’ll have to link the card to a bank account, debit card, credit card, or cash using a GreenDot MoneyPak.

Currently, the rewards offered to Farmville players are limited. Signing up or converting an existing account will earn you 63 dollars of in-game currency, and the first five purchases made with the card in excess of $25 USD will earn you 50 dollars in-game. Other actions such as harvesting your money tree, adding money to the prepaid card, and so on will earn you smaller amounts.

While Zynga has worked with other companies to offer FarmVille promotions, the interesting thing here is that the entire process is digital, and automatic. No scanning codes, or printing coupons. Purchases with the card immediately earn players rewards, but vice versa as well. Future plans for the card could include a scenario were planting a branded plant in-game could earn you real-life rewards. Again, from All Things D:

For instance, Starbucks could award consumers, who have planted coffee crops, a chance to redeem a coupon inside the store.

On the one hand, FarmVille players might like the opportunity to earn in-game rewards for mundane tasks like buying groceries and pumping gas. The integration of in-game actions, like planting branded trees, is an interesting one and saddles the divide between online and offline life.  On the other hand, the staggeringly completeness of the plan is a bit creepy — especially the idea of players turning their farms into adspace in order to get more funnymoney to play the game.

It’s worth noting that Amex is currently only offering these rewards for pre-paid cards. In one deft move, this opens up their possible to audiences to those too young to own a credit card, and insulates them from bad potential bad news stories. Can you imagine what would I happen if it were a credit card? I guarantee that someone would rack up hundreds of thousands of dollars in credit card debt to buy an in-game fish tank, or something.

This is the future; spend your digital dollars to earn fake money for your cartoon farm.