All Six Star Wars in One YouTube Video | The Mary Sue 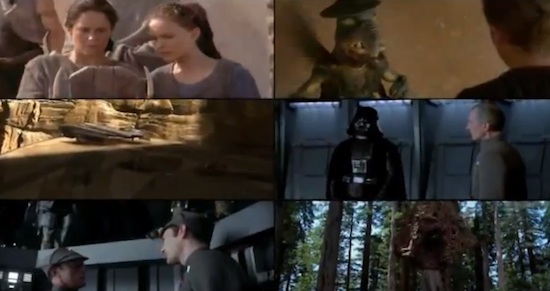 It’s rare, but sometimes, in my stumbles around the Internet, I encounter a thing that has never occurred to me before and it makes my brain explode. Today, that thing was the YouTube video ALL 6 STAR WARS which, since I know you’re wondering, is exactly what it sounds like — the cacophonous blur of all six Star Wars films playing in a single YouTube video. While it’s not exactly new, I feel pretty strongly that it’s a thing you should know exists. By all means, take a look for yourself and settle once and for all the question, “What would it feel like to watch Star Wars while having several massive strokes?”

Clearly, this video is exactly the reason we have the Internet in the first place. You can help us settle an office bet in the comments, though — is this the proper presentation, or should Episodes 1, 2, and 3 be in a vertical left hand column, with 4, 5, and 6 in a similar alignment on the right? We’ll let you be the judge, though that probably won’t stop Rollin and I from sniping at one another over it for the rest of the afternoon.