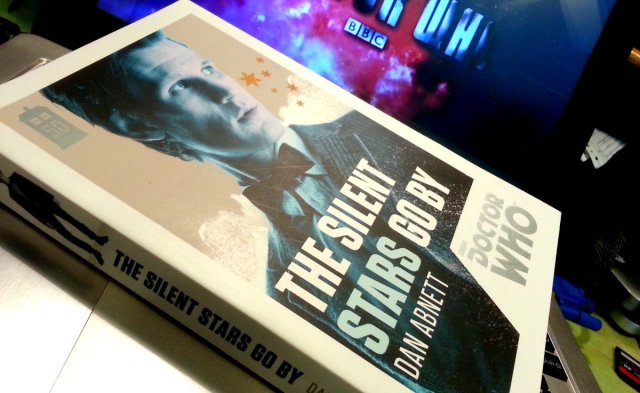 BBC Books recently put out a set of 11 re-released novels to commemorate the 50th anniversary of Doctor Who. We hosted a giveaway where we let 15 readers pick the book of their choice, and six of the fifteen of you picked The Silent Stars Go By by Dan Abnett. You all made an excellent choice. I read it, and had the chance to talk to Abnett about the book.

The Silent Stars Go By is an 11th Doctor Christmas story featuring companions Amy Pond and Rory Williams. It begins — as so many Doctor Who tales do — with the TARDIS appearing somewhere other than where the Doctor was trying to put it. When the Doctor tries to take the Ponds to Leadworth for Christmas 2011, they wind up on a strange and rather cold planet.

They soon learn that the world is populated by Morphans who are trying to terraform a new world, but something is stopping them. Each year is colder than the last, and there’s something in the woods attacking villagers. The Doctor learns that a young girl has gone missing, and he won’t let a little thing like being imprisoned by Morphans stop him from saving her.

This book absolutely feels like an episode of Doctor Who. There’s a sense of danger that’s tapered with humor and a general sense that everything will be alright. The show’s Christmas specials are some of the best there are, and The Silent Stars Go By fits right in with any of them.

I was fortunate enough to be able to chat with the author about the book, his work on Guardians of the Galaxy, and even Winnie the Pooh.

Glen Tickle: Where does the book fall in terms of the timeline of the 11th Doctor? In the book Rory mentions they were trying to get back to Christmas 2011, any correlation to that year’s Christmas special “The Doctor, The Widow, and The Wardrobe”?

I guess it must fit around there. I was trying to be specific yet simultaneously vague. I guess that’s the hard part about writing tie-in novels… you want them to be canonical yet the canon might shift around you. I certainly think Silent Stars feels in continuity.

Obviously this was written well before their return in a recent episode, but why did you choose the Ice Warriors as The Doctor’s opponent in the story?

I’ve always loved the Ice Warriors. I love the “races” that the Doctor battles against… Cybermen, Sontarans, Silurians etc. I think it’s amazing the Ice Warriors are considered a top ten monster yet they have only appeared three or four times and the last time was during the Second Doctor’s tenure. In the Sixties!

I asked to be allowed to bring them back, and it took the BBC ages to approve my outline… because they were considering bringing them back on TV last season. When they decided it would be this season instead, they gave me the go-ahead.

Was there much input from the BBC or Steven Moffat with the book, or are they more standalone entities?

“The Beeb” [BBC] and, this Stephen, approves everything we do on the books. Hence the long wait for the Ice Warriors approval.

Do you have a particular favorite Ice Warrior story?

My fave ice warriors story would probably have to be the very first one in the Troughton Era, though the new version screened recently was very cool indeed, and I am very fond of their appearances in the two Jon Pertwee “Peladon” stories.

You mention in the book’s introduction that your Doctor was Jon Pertwee, what was your favorite story of his?

Jon was my fave because he was the Doctor I first started watching. I would choose “Carnival of Monsters,” which is a wonderful story, with a great trope of a concept well applied, and the Drashigs scared me silly. Plus, a plesiosaur and Katy Manning! What more could you want?

Since he’s the current Doctor, do you have a favorite Matt Smith story?

I wrote Matt’s Doctor because they asked me too, just as I wrote David Tennant and Sylvester McCoy stories – because they were the incumbent Doctor at the time (I’ve actually written more Seventh Doctor stories in terms of comics and audios than any other doctor.)

I was actually a little apprehensive coming in to the Silent Stars, because David’s Doctor had been my fave of the new Whos, and I’d written quite a bit of his character. Once I’d started in on the novel, I found I loved Matt’s Doctor and his relationship with Rory and Amy. As a result, my favourite Matt Smith story must be his very first episode. Beautifully done. The Doctor’s Wife also blew me away.

Since you also write on Guardians of the Galaxy, is there any chance we’ll see a Galaxy/Who crossover like the recent Who/Star Trek IDW comic?

I hope so! I wrote IDW’s Ghosterbusters/Star Trek/Transformers/GI Joe cross over for them. So I obviously have the necessary dorsal muscles (as Owl might say to Pooh) to pull it off.

[Editorial note: I would very much like to see a Doctor Who/Winnie the Pooh crossover now. If anyone at the BBC is reading this, please make that happen. Thanks. — Glen]

Which Doctor Who book would you recommend someone read if they’re not familiar with the universe?

Uhm… mine? Is that a trick question? Seriously, any of the 11 representations being published for the anniversary… and anything by Terrance Dicks, the master (of DW books!).

[Second Editorial note: Abnett is right. Silent Stars is wonderful, and would make a good introduction for someone not familiar with Doctor Who since it doesn’t rely on a lot of prior knowledge, and focuses more on the story of the Morphans than on the Doctor and his companions. Also, Terrance Dicks is great. — Glen]

Are there any other classic monsters you’d like to see brought back into rotation?

Zygons. And Draconians. And Ogrons.

We’ve already seen set photos from the 50th showing a Zygon. Any chance Draconians or Ogrons could pop up as well?

Draconians and Ogrons? One can only hope!

Is there anything in this, or any of your other Doctor Who stories that you think would be impossible for Steven Moffat to pull of on television? The show pulls off some unbelievable things, but with a book or comic you can literally do anything.

Moffat and the previous showrunner Davies were both amazing. We Who-fans owe them both so much it would be churlish to be critical… but if I had a chance, I’d tell a story more slowly, over three or four episodes, with tension and build. Not so frenetic. Hey, that’s just me. Old School Who.

Would you prefer to see the show get back to taking a few episodes to wrap up an adventure? Besides some two-parters there haven’t been many multi-episode stories for any of the last three Doctors.

I certainly think it would be very interesting to try that for a change. There was always something very chilling and atmospheric about the pacing of “old” Who, with the tension of the multiple cliff-hangers and the development of the plot. Sometimes they were TOO long, with a feeling their were padded to fit the length, but generally it really worked.  Maybe it should be tried out now and then as a literal change of pace.

Any guesses or inside info on who Clara really is?

I’d like to thank Mr. Abnett for taking to time to chat about his book, and Christine Melanson from BBC Books for her help is setting up the interview and book giveaway. The Silent Stars Go By is available now, and it matches the tone of the show and Matt Smith’s Doctor perfectly.