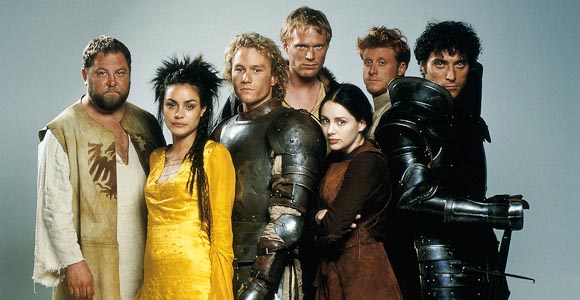 In 2001, we were graced with the presence that was A Knight’s Tale. The story of a peasant posing as a knight in the 14th century, an alternate 14th century of sorts, where David Bowie and other modern musical acts exist just so Lords and Ladies could dance jauntily at court. It starred Heath Ledger, Shannyn Sossamon, and Rufus Sewell, and it was delightfully terrible/amazing. The only logical thing to do is make a television drama based on it over ten years later, right? What I’d like to know is, why hasn’t Battlestar Galactica’s Ron Moore been attending our Knight’s Tale fan club meetings?

A Knight’s Tale also starred the fantastic Paul Bettany as Chaucer, Game of Thrones’ Mark Addy, and Firefly’s Alan Tudyk. They were quite the team.

So what would this TV show be like? Well, details are few at this juncture but Deadline reports ABC has bought the proposed project from Sony Pictures TV.

“In addition to writing, Moore is executive producing with his producing partner at Tall Ship Prods,” says Deadline. “Maril Davis as well as the film’s writer-director-producer Brian Helgeland and producer Todd Black.”

What are your thoughts on bringing A Knight’s Tale to TV? My initial thought was “why?” but the more I think about it, the more I think it could be really great. Moore did a pretty good job with BSG and if we’re lucky, he’ll bring Bear McCreary along to work on the music.