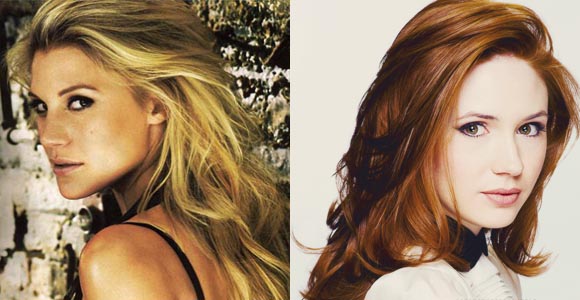 When fandoms collide, it’s (usually) a beautiful thing. I think it’s safe to say that applies to this news. Battlestar Galactica’s Katee Sackhoff has been cast in Karen Gillan’s first movie gig after her run on Doctor Who. And get this, Sackhoff is playing Gillan’s mom. As if that wasn’t enough to get you to keep reading, how about the possibility of Gillan playing a role in Inspector Spacetime?

In our interview with Gillan last month, she mentioned her post-Who plans.

“My hopes are to do really good projects, I want to do some good films, and I want to do more theater,” she said. “I’m coming over to America to do my first American thing which is called Oculus and it’s a film which will be shot in Alabama which is really exciting because I’ve never been there.”

And yes, Oculus is the film which will bring the two sci-fi stars together.

“The former Amy Pond is starring as Kaylie, a young woman who grew up haunted by the mysterious murder of her parents a decade ago,” writes Empire Online. “Though her brother went to prison for the crime, Kaylie is instead convinced that a haunted antique mirror was really to blame. And though her brother emerges from the slammer ready to move on, Kaylie can’t help but keep digging into the incident.”

Sackhoff has been cast as Marie, Kaylie’s mother, to be played in flashback scenes (“Aha!” you say, “Now it makes more sense.”), Shooting begins next month.

We recently heard Sackhoff’s fellow BSG alumn, Tricia Helfer, was getting a guest role on NBC’s Community. Specifically related to their in-show Doctor Who parody, Inspector Spacetime. Meanwhile, it seems that Gillan’s (and everyone else’s) wish to play some part in Inspector Spacetime may be closer to reality thanks to some tweets between her and writer Andy Bobrow.

@abobrow yes! that sounds like a perfect day.Tatoo, spaceship spotting at the airport then Community. INSPECTOR SPACE TTIIIMME