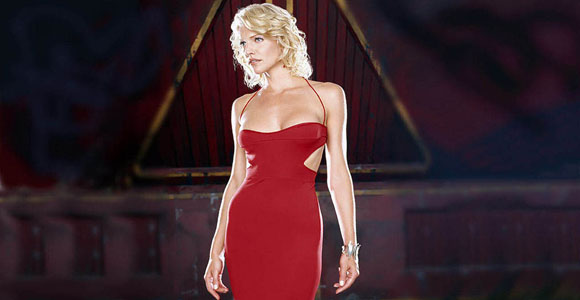 Most of us know her as Number Six/Caprica/many other character names from Battlestar Galactica but actress Tricia Helfer has had a healthy career outside the sci-fi drama. But sci-fi and comedy fans alike should be excited about this news. Helfer is going to have a cameo on the upcoming final season of Community and it will involve their Doctor Who parody, Inspector Spacetime!

TV Line were the ones to break the news. They write, “Putting to good use her inner geek goddess, Helfer will drop by as Lauren, a drop-dead gorgeous superfan of the (fictional) cult-hit Inspector Spacetime.”

I’m sure Helfer will have plenty work from considering she’s had some experience with superfans in her line of work.

“As previously reported, the coming season’s fourth episode centers on Abed attending a convention for the Doctor Who-esque series,” they continued. “There, he’ll befriend a fellow fanboy, played by Little Britain’s Matt Lucas.”

Although there’s been some legal trouble for the Inspector Spacetime web series (not surprising), the parody will continue a healthy life on the main show it seems. We previously heard Doctor Who star Karen Gillan had heard about, and loved, the idea.  Still no word on if they’ve tried to make contact with her but Helfer is a great sci-fi actor for them to catch regardless.