Your Speedo Is Not Hydrodynamic Enough, Wear 3D Printed Shark Skin Instead

"3D-printed synthetic skin-nado" just doesn't have the same ring to it. 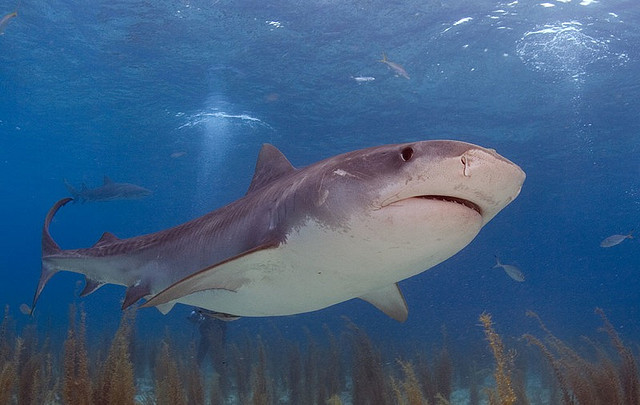 Sharks can swim incredibly fast due to “denticles” on their skin, which are microscopic scales that cover their entire body. As puny humans, we are inherently jealous of sharks and covet their underwater skills. So a group of researchers got together to make their own version of denticles, just to stick it to sharks. Those stupid, majestic sharks.

Okay, so the scientists didn’t actually set out to be better than sharks — they were just trying to figure out how it is that denticles are able to boost a shark’s speed so dramatically. In order to test the way that these scales disrupt the flow of water over the shark’s body and reduce the amount of drag it experiences, George Lauder from Harvard University and a team of other researchers found a piece of mako shark at a local fish market and scanned it using a high resolution view.

From there, they zoomed in on a single denticle, constructed a detailed model, copied it over and over again, and printed it in various different ways. It took over a year for them to nail the right materials, sizing and spacing, but eventually they got something that was reasonably close to the skin of an actual shark. Take that, nature!

According to the research published on Wednesday in the Journal of Experimental Biology, once they were satisfied with their synthetic skin, they fitted it onto a flexible paddle to test its speed. And it worked — the faux-denticle covered paddle delivered a 6.6 percent boost in speed over the smooth version, and used 5.9 percent less energy to travel the same distance.

However, sharks haven’t been rendered completely obsolete just yet. 3D printing a spillion tiny scales is sort of time consuming, and Lauder doesn’t think it’s a feasible way to boost your average swimmer’s speed just yet. “The manufacturing challenges are tremendous,” he said. Guess actual sharks still have us beat — they come equipped with denticles right from the outset. But let’s see them try to swim backwards, huh? At least we’ve got that on ’em.