Liked Skyfall? The British Government is was Recruiting 00 Agents Online! 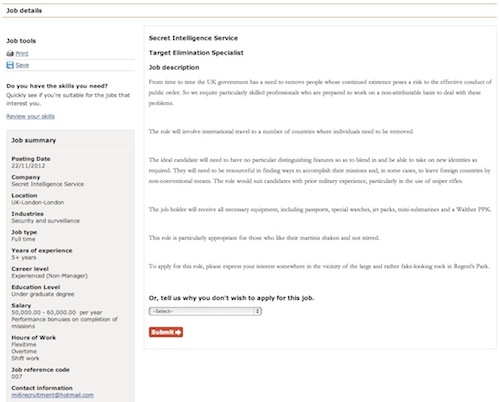 Who hasn’t wanted to be a secret agent at least once in their life. Look at James Bond: He always gets the toys, he always gets the girl, and he gets to wear an awesome-looking tuxedo more than anybody. (Also, he saves the world. That’s pretty cool too.) The point is, if you could say… apply for that job online, you’d do it, right?

Well guess what? You missed your shot. The British government actually posted a job listing for a new 00 agent on their recruitment website yesterday. After only a day or two, the listing has already been taken down; Possibly because of the overwhelming number applicants, or because it was a big joke.

The listing was posted on Gov.uk, a newly created job site for the entire British government. It’s unclear how whoever created the job page managed to access and approval from the British government: but that would make sense, given that it’s a job recruiting a secret agent.

Here’s a sample from the job description:

From time to time the UK government has a need to remove people whose continued existence poses a risk to the effective conduct of the public order. So we require particularly skilled professionals who are prepared to work on a non-attributable basis to deal with these problems.

Though the description never officially mentioned anything about a “license to kill”, the job is classified “007”, and the ideal candidate would have preferred their martinis “shaken, not stirred.”

(Gov.uk via The Verge)