Don’t Miss Round 2 of the 2014 Zurich Chess Challenge

Otherwise, you won't know what I'm talking about when I keep trying to change the subject at your Super Bowl party. 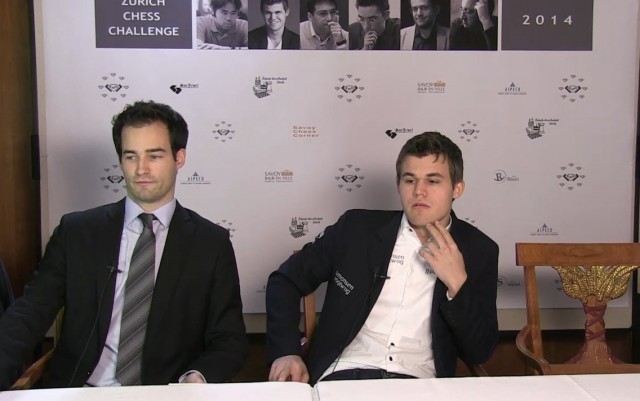 Round 1 of the Zurich Chess Challenge kicked off yesterday. Not surprisingly, Boris Gelfand lost to World Champion Magnus Carlsen. Hikaru Nakamura drew against Fabiano Caruana to gain half a point each, and Viswanathan Anand lost his first match to Levon Aronian. There are new matchups today, and we’re excited to see how things play out.

The game you’ll really want to follow today is between Carlsen and Aronian, because if any of these players has a chance to beat the champ, it’s Aronian with his 2812 rating (less than Carlsen’s 2872, but the closest out of the competitors.) Anand (2773) is up against Nakamura (2789), and he’ll need a few wins before Monday’s game with Carlsen if he expects to get any kind of payback for the World Championship. Gelfand (2777), coming off a loss with Carlsen, will play Caruana (2782).

You can watch the games with commentary on the Chess24 Livestream channel, and if you want to follow along at your own pace check out the ChessArena embed below. It allows you to see the boards as they are without the Zurich commentators speculating on upcoming moves.

Our friend Susan Polgar and the rest of the commentary team for the 2013 World Championship in Chennai quickly realized they should leave a view of the board as-is on screen while they speculate and predict on a separate board. Hopefully, the Zurich commentators will come to the same realization today. It’s confusing enough having them switch between the three active games, but then to not be able to follow the actual moves is maddening.

Hopefully, the combination of the two embeds below will be a better solution than just the Livestream we had for Round 1.

(via Chess24 and Susan Polgar, image via Zurich Chess Challenge)