Just imagine I made a really great sports analogy here to illustrate how exciting this match is. 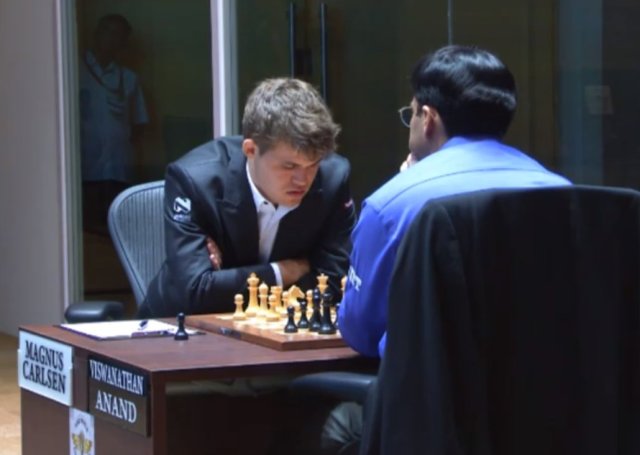 We’ve been super pumped all week for the Zurich Chess Challenge, but today’s especially exciting, because we’ll see a rematch between World Champion Magnus Carlsen and the man he beat the for the title just a few short months ago in Chennai, India’s Viswanathan Anand. Anand has a chance for revenge, but does he have what it takes to beat Carlsen?

Anand finally got his first win of the Zurich tournament yesterday against Boris Gelfand, so he’s likely feeling pretty good going into today’s game with Carlsen. Anand also has the advantage of playing the white pieces, but as Carlsen so clearly demonstrated to Hikaru Nakamura in Round 3, he can win with black.

Carlsen is also coming off of a win yesterday against Fabiano Caruana and really has the momentum of this tournament behind him. Each win is slowly moving Carlsen towards a benchmark rating of 2900. He’s having a pretty great week that Anand is hoping to ruin. It will be an interesting game, but it’s clearly an uphill battle for Anand. I still think Carlsen will take it, but it should be a fight. A draw would be disappointing but might be the best Anand can hope for.

The other game yesterday was between second highest ranking player in the world Levon Aronian and Nakamura, who’s now had two losses in a row. Aronian is half a point behind Carlsen, who leads the tournament with 3 1/2 points, and is the World Champion’s strongest competition.