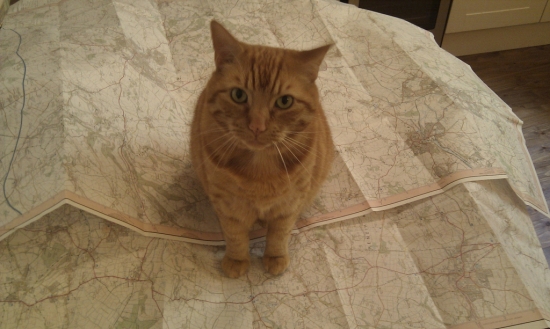 Do you find yourself staying awake at night, wishing there was a way to conveniently track all the cats in London? No? Neither have I, actually. But someone at the Zoological Society of London must have, because they’ve introduced Cat Map, a map that shows the names, types, location, and even color of London’s feline residents. Why would they do this? Because of tigers of course.

Cat Map is part of an effort to bring attention to the London Zoo’s Tiger Territory. Both the tigers, five-year-old Jae Jae and four-year-old Melati, that live at the zoo appear on the Cat Map. Weirdly, their color description on Cat Map shows up as “ginger,” which doesn’t really seem to capture the majestic beasts’ striking striped pattern.

Users of Cat Map can upload information about their cats, or their neighbor’s cats, as well as get specified cat information by location. How many cats in London are named “Lion-O“? Surprisingly none of them, but it’s easy to search by name, type, or location.

The map itself, though started to cover London, isn’t limited to just that city, and is open to let users add cats from around the world. There are only 1117 cats listed right now, but Cat Map is only a few days old. I’m sure once cat owners realize there’s a website where they can tell the whole world about their precious little furball, that number will shoot up to the millions pretty quickly.

Cat Map also lists the number of Sumatran tigers left in the wild, and that number is a depressing 300. The designer of the Cat Map, Filip Hnizdo said he hoped the site can make people think about tiger conservation, and added, “It highlights the fact that people love cats and the similarity between big cats and little cats.”

The Zoological Society of London says the site will stay up for at least a year, but I’d imagine if it catches on it will stick around for much longer. They’d also like to see people from around the world adding cats to site, which can be done at zsl.org/catmap.

I’m interested to see how long it takes my friend Jill Pantozzi from The Mary Sue to upload her cats to the Cat Map, if she hasn’t already.

The Internet really loves cats, so go upload your cat and then maybe indirectly help tigers.

(via Wired UK, image via edmittance)