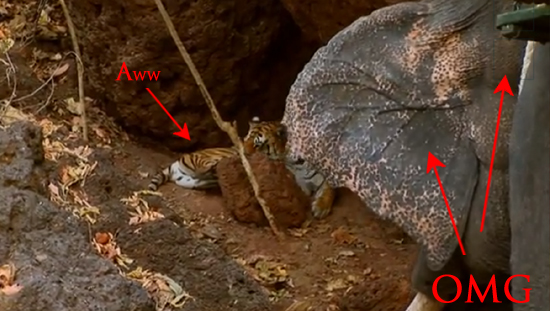 Adorable kitten videos circulating on the Internet really don’t need an introduction, not even when they’re tiger cubs. But believe it or not, this is the first footage ever made of a tiger mom with newborn cubs in the wild. And who’s bringing this to us? BBC Earth is. Nicely done, BBC! And who brought it to them? Elephants. See for yourself.

There are a few things delightful and amazing about this nearly four-minute video, up to and including:

Now you just need to watch the video and see for yourself:

What amazes me the most are the cameramen.  Rather, camera elephants. Elecams? That is to say, elephants mounted with special cameras, because they can wander close without spooking the cats. Indeed, a human getting this close would not only disturb the scene, but would run a high risk of ending up as lunch. Only foolish young tigers dare to attack a grown elephant. They normally go after only calves, but if there are no baby elephants around, everything’s groovy, as you can see here.

The unnarrated footage at the 0:25 mark is what cracks me up the most. It’s almost ominous, but now I love these elephants. It’s not the first time cameras have been mounted on animals before with the purpose of filming other animals. There even used to be a “Museum of Animal Perspectives” Flickr page that showed POV videos of such critters as wolves, alligators, and scorpions. Sadly, it’s gone now.

But if pachyderms can score such rare footage from the wild, going where we can’t go and seeing what we can’t see…what’s next? Where else will this lead? Elephants wearing Google Glasses, hiding in plain sight, going wherever they please and watching all that occurs there? Soon, elephants will get all the best footage as the news breaks. Perhaps they’ll even start filming us in our sleep.

Nah, these crafty pachyderms have surely got other means of keeping tabs on you — and beware, they are not all accounted for. 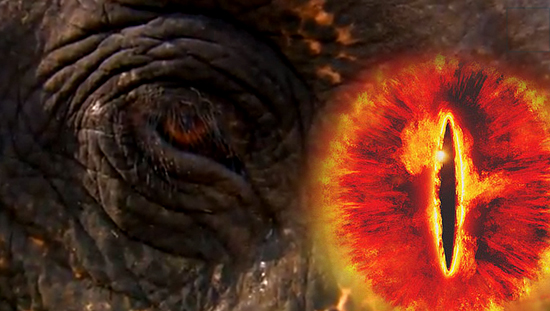