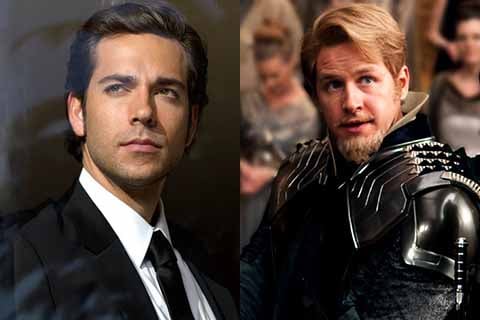 Well this is certainly news relative to our interests. It seems Marvel Studios have to recast the role of Fandral (one of the Warriors Three) in the Thor sequel. And the person most likely to get the job? None other than NBC’s Chuck, Zachary Levi. Cool news for Chuck fans, sad news for fans of Once Upon A Time’s Prince Charming, Josh Dallas, who previously held the role. Did I just blow your mind?

Maybe I didn’t but I had no idea Prince Charming and Fandral were the same person until I rewatched Thor last week so it was a pretty big surprise to me. Regardless, I’m bummed now because I won’t be able to watch Thor 2 with that knowledge.

As you may have guessed, Dallas’ work on the second season of Once Upon A Time is what’s keeping him from reprising the role. Interestingly enough, it was Levi who was supposed to play Fandral in the first place.

“Levi’s involvement may blessed by the gods, however,” writes The Hollywood Reporter. “He was in talks to originally play the role in 2010 but had to bow out when his cult NBC show Chuck got a last-minute reprieve from cancellation and an episode extension.”

THR says the negotiations are still in the early stages but that an “offer is imminent.” Thor 2 is set to start filming in July with Game of Thrones director Alan Taylor taking over for Kenneth Branagh. The rest of the cast are expected to return and Danish actor Mads Mikkelson is expected to play the villain.