The casts of Thor 2 and Iron Man 3 are still coming together, and for once, we actually know which villain will be antagonizing one of our beloved Marvel heroes. Ashley Hamilton, who recently competed on Dancing With the Stars and is best known (for some of us) for being married to Shannen Doherty for five seconds (thereabouts), is set to play Firepower in Iron Man 3 alongside a currently undisclosed villain being played by Sir Ben Kingsley. And while the villain has not been confirmed yet for Thor 2 (besides Loki), Danish actor Mads Mikkelson (Casino Royale) is in talks to take on Chris Hemsworth‘s god of thunder. And while he is in no way a bad guy, Jon Favreau will be back as Happy Hogan in Iron Man 3!

While we still don’t know who Kingsley is playing, but we definitely know that Hamilton is playing Firepower. What’s worth noting is that Firepower’s pilot, Jack Taggert, seems to have been African American in previous issues of the Iron Man comic, and Hamitlon is clearly not. However, it has been confirmed several times that Iron Man 3 is drawing from Warren Ellis‘ Extremis storyline, so perhaps we’ll just accept this as an alternative universe-type thing. What is also important to know about Firepower, a weaponized robot suit like the Iron Man, was given to Taggert by — wait for it — the Mandarin, the role that Kingsley has been totally rumored to be playing, only to be totally denied every time someone brings it up.

So, there’s that little sweetheart to think about.

And, in the other bit of Iron Man 3 news, Favreau, while he has stepped down from directing and will stick to his producer role, will not give up his role of Happy Hogan so easily. He will be back as Tony Stark’s sidekick/bodyguard/chauffeur, allowing himself to be directed by Shane Black. And then probably sit back and enjoy some blueberries with Robert Downey, Jr.

Now, on to Thor 2! Mikkelson was last seen in last year’s The Three Musketeers and Clash of the Titans and will take on an unnamed villain role. It’s unclear whether he’ll be on the side of Loki (Tom Hiddleston) or will be a huge, godly nuisance to both brothers. Thor 2 will be directed by Alan Taylor (Game of Thrones). And sadly, that’s about all we have for you. But we know one thing: Mads Mikkelson will definitely not be playing the Mandarin. This we can confirm. Because that would be downright silly.

As soon as we know whether or not Mikkelson’s character will be accepting this hug being offered by Tom Hiddleston, we will tell you. 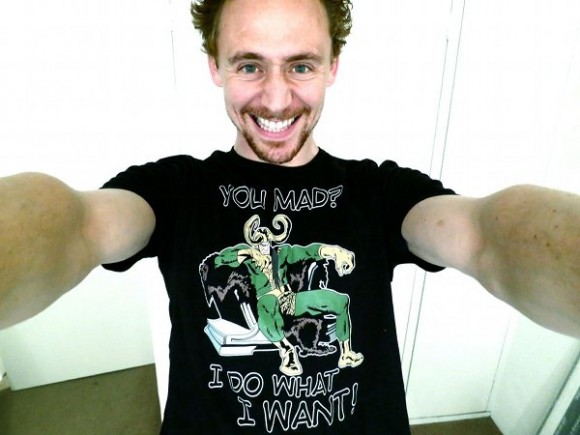