Idris Elba Is Back As Heimdall For Thor 2, Says We’ll Learn More About The Asgardians 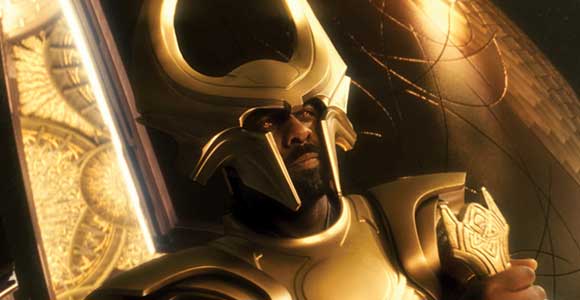 You’ll be able to see Idris Elba very soon in Ridley Scott’s Prometheus, but the British actor recently dropped some hints on Marvel Studios’ Thor 2. Namely that he’ll be back to take up Heimdall’s mantle in the film. But as much as we love Elba, what we’d like to know is, will there be more Sif?

The Luther actor told Collider he is definitely back for Thor 2. Although he hasn’t read a script yet, he’s seen an outline. “My schedule is really packed, but I’m going to do Thor after I play [Nelson] Mandela,” he said, mentioning the upcoming film Long Walk To Freedom. Empire Online also mentions, “The other films on Elba’s packed slate this year are Guillermo del Toro’s Pacific Rim and kidnap thriller No Good Deed.”

“I’d just like to get to know him a bit more,” said Elba. “Who is Heimdall? He guards the gate. Okay. Is there anything else? I don’t know what is in the script because I haven’t read it yet. But, the audience has responded to Asgard and wants to know more about who lives there and what it’s about. I’m sure, if they do that, Heimdall will be featured more.”

Elba told MTV News he recently went in for a costume fitting and is really excited about getting started. He also talked with them about where the film will delve deeper.

“What’s more involved is who the Asgardians are. I think we’ll see a sense of that,” he told them. “It’s a huge film, Thor 2, but I also think it’s micro in a way that you start to look at people, who they are a little bit more.”

Sif and the Warriors Three were one of the best parts of Thor. I was disappointed we didn’t get more of them but if what Elba says is true, we could learn a lot about those daring Asgardians. (By the way, if you liked Sif you should check out writer Kelly Sue Deconnick’s Sif one-shot from Marvel.)