Why Don't Writers Read Fanfiction of Their Own Work? | The Mary Sue

That doesn't mean it's not stupid, though. 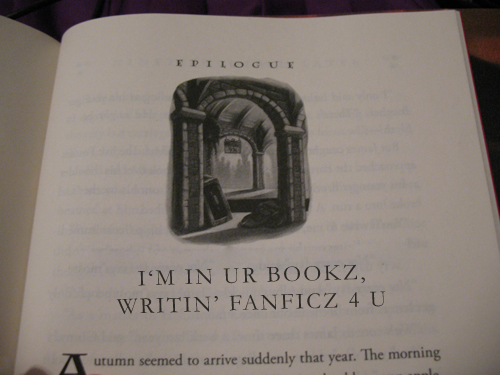 Despite its popularity, fanfiction still gets a pretty bad rap in some writing circles. A lot of writers especially hate it when you send them fanfiction based on their work, but usually it has nothing to do with what they think of the medium as a whole. It’s because you’re sending them a ticking time bomb of copyright problems without realizing it.

Let’s create a fictional scenario to explain: you are the writer of a hit series of children’s books about a young boy warlock named Herby Prancer. You are literally richer than God as a result of your writings, but for some reason you still check your own e-mail by yourself like a charlatan. You come across a message from an excited fan who thinks that Herby Prancer should encounter a dragon-mummy somewhere along his travels, and before you realize what’s happening, you’re reading the beginning a 10,000 word story about it.

Now you can never ever have Herby meet a dragon or a mummy of any kind in your books, because if you do, then that fan is going to think you stole the idea from them and cry foul — and the worst part is, they could be right. The human brain works in weird ways, and even if you didn’t intend to write about dragon-mummies, now they’re in your head setting their own bandages on fire and doing whatever it is that dragon-mummies do. Wait. Are dragon-mummies a cool idea, guys? I came up with that as a joke, but now I’m sort of into it.

Anyway, on Twitter earlier this morning, writer Cleolinda Jones (you might remember her from her amazing Hannibal recaps or her Movies in 15 Minutes series — or you might remember her from that time she hate-read the Twilight series and blogged about it, which she will literally never live down) brought up her own experiences with submitting a fan work to an established television series:

A side note on writers who feel they can’t read fanfic, to protect themselves: young college student Cleo wrote an X-Files script.

Of course I sent it to them, because I was That Fan. I was clearly not unique, because they knew a script package when they saw one

and sent it back unopened with a kind stock letter from legal about liabilities. So I knew they hadn’t read it. Here’s the thing:

Years later, there was an episode that was partly but weirdly similar to my script. If they hadn’t sent it back *unopened*

I could have genuinely believed they ripped me off. IN COURT. Even though they truly had not read it. This way, I knew they hadn’t.

<–Which is exactly why it’s so easy for a creator to look like they ripped a fan off, when in fact it’s the fan who extrapolated from them.

So remember my travails, I guess, when an author refuses to read fic (or comes up with something like yours).

That doesn’t mean that you shouldn’t continue what you’re doing if you’re a fanfiction writer, of course. People write spec scripts like the one Cleolinda describes all the time — it’s pretty much a required exercise in most script-writing classes. Similarly, prose fanfiction is a fantastic way to hone skills. After all, when you’re a writer, more writing is always better than less writing. And if the idea you’ve come up with ends up becoming a part of the story of the original work anyway, then that means you were on the right track and that your ideas were pretty great in the first place!

Just don’t expect that you’re owed any attention from the author or creative team whose stories you’re drawing inspiration from, because as much as some of them would like to be able to see what their fans are up to, more often than not it’s bound to become a huge liability issue for them if they try.

If you’d like to write your own epic novel about dragon-mummies, though, then go ahead. We’ll give you that one. The world needs to know about these majestic creatures.