You know what there doesn’t need to be more of? Animals that eat the flesh of their own kind. King snakes, squids, mantids, lions — the list goes on. Cannibalism is positively rampant in the wild, but a slimy and newly discovered species has just joined the list in its own special way: The worm-like caecilian known as Microcaecilia dermatophaga eats the skin of its own mother right from her body. Because nature wasn’t unsettling enough.

This critter is unquestionably gross, but it’s a commendable act of resource management. Most of us just flake off our skin, wasting it like suckers. This female caecilian specifically grows an extra layer of skin for her young. The babies then scrape the skin off with teeth specially shaped for this purpose, then devour it for its fatty nutrients. The Microcaecilia dermatophaga is another of nature’s hardcore moms. And it’s all good — she’ll regrow it a few days later for another feast.

And yes, the caecilian is an amphibian. A burrowing amphibian that sure looks like an earthworm and can even pass for an eel in the water. This particular species is the first new variety of caecilian discovered in French Guiana in 150 years, and we can assume people there were really looking for more legless worm-eels that live underground.

Dr. Emma Sherratt from Harvard University discovered Microcaecilia dermatophaga during her PhD when she was working at the Natural History Museum in London. She said:

Quite unlike worms, caecilians have big mouths, sharp teeth, and backbones, and they like to eat invertebrates, so when they chow down on an actual earthworm, it looks like cannibalism yet again. Oh, and their eyes are covered by bone and are therefore nearly blind, but the tendrils on their heads can scent the chemicals in the soil around them.

And while they’re wormy and slimy, if you get a good luck up close, the babies are actually rather cute. 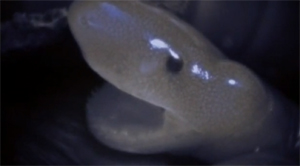 Adorable. Until they go on their skin-eating frenzy, then they're little worm-sharks.

But Dr. Sherratt isn’t fazed. Quite the contrary, she’s delighted by them:

“Molecular estimates tell us they are probably around 250 million years old, which means caecilians survived whatever killed off dinosaurs, and many other creatures around the world, and for that reason I think they’re quite extraordinary.”

By the way, aside from outliving the dinosaurs, their name  is pronounced almost exactly like “Sicilian.” Yikes. Be careful what you ask for when you order pizza in French Guiana.

(PLOS One via PhysOrg, images courtesy of PLoS ONE and YouTube)