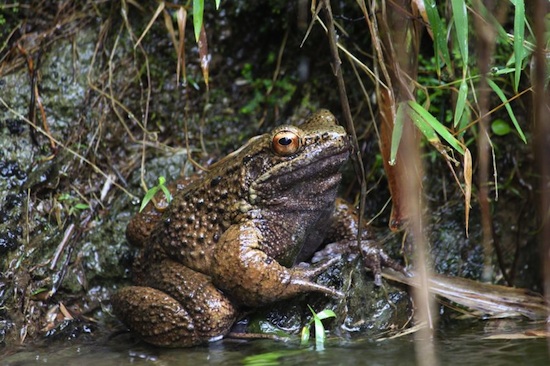 The Otton frog, a rare breed of frog native to the islands of Southern Japan, has an evolutionary adaptation as weird as it is awesome — a retractable bone claw, just like Wolverine. Unlike everyone’s favorite tiny Canadian mutant, though, the Otton frog uses its claws for both loving and fighting, sinking the bone spike into a female to keep from being thrown off during mating and using the spike as a weapon when it battles other males for territory.

Most of the time, the Otton frog’s bone dagger is invisible, encased in skin that makes it look like an odd but harmless extra thumb, but if it has mating or fighting to do, the males can flip the spike out and get ready to rumble. While females also have the extra thumb, the study published this week in the Journal of Zoology states that they haven’t been observed to use it for combat.

Researchers think that the frog’s aggression and natural weaponry were initially an adaptation for mating that became a handy tool for combat as well. Since the Otton frog is an island species, good nesting sites are limited. With space at a premium, males are ready and willing to fight each other over the most attractive nests. During these wrestling matches, the claws come out, leaving most adult specimens showing scars on their backs where they’ve been stabbed during duels over territory and suggesting that while the amphibians have the retractable claws bit down, they still have some way to go on the mutant healing factor angle.

While it’s a rare adaptation, this isn’t the first time a frog has been found with such an odd natural weapon; Rosenberg’s Gladiator tree frog of South America has a similar bony dagger protruding from its hand that it uses in sometimes lethal battles with other males.