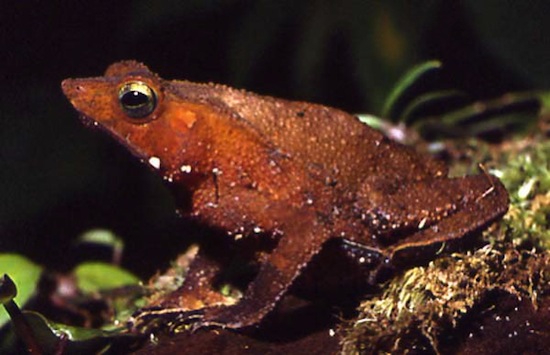 Today in News You Probably Would Have Been Happier Not Knowing, the tiny, unassuming Amazonian frog Rhinella proboscidea doesn’t seem like the most awful creature ever to walk the Earth, but it probably is. That’s because Rhinella proboscidea, as a species, are a bunch of necrophiliacs. If they can’t find a living lady during mating season, the small brown frogs quickly get, like, way less picky, plucking egg cells from the corpses of females killed during the often violent rounds of ‘explosive breeding’ and then fertilizing them.

As reported in the Journal of Natural History, mating season is not a great time to be a female Rhinella proboscidea. A frenzied few days of mating means that many females die in the process, either smashed, drowned, or simply exhausted beneath the weight of a crush of male suitors, events which the authors, as masters of the sublime, point out “are obviously detrimental to females.” As you can imagine, killing your mate during intercourse is not good business from an evolutionary standpoint — in addition to being just terrible manners, of course. That’s why male Rhinella proboscidea have developed a workaround of the worst sort imaginable. Rather than let the eggs in a dead female go to waste, male frogs will squeeze the eggs out of a female and fertilize them after her death.

It’s not the first time that necrophilia has been observed in amphibians. Cane toads, for example, will hump pretty much any corpse put in front of them, because hey, it’s worth a shot. It is, though, the first time researchers have seen an animal population of any sort demonstrate necrophiliac tendencies that actually result in breeding, a practice termed ‘functional necrophilia.’ We’ll just assume that narrowly edged out the other working title for the behavior, ‘UUUUUUGGGGGGHHHHHHH.’

Researchers point out that while the practice seems like the worst thing to us, it may actually be beneficial to frogs, who are notorious for being a little light on social mores — or example, not seeming to mind if they kill their partner during coitus. The study speculates that the behavior may be even more widespread, though undocumented:

As expulsion of oocytes from dead females probably can have fitness advantages for both partners, the behaviour may be more prevalent in anurans, or even other groups that rely on external fertilization, than present records indicate.

To which we say, if this is happening and undocumented, let’s hope to everything decent in the world that it stays that way.

I’d like to write more about this and explain the process in further detail, except for oh, no, wait, I would literally rather do almost anything than that. If you’re the morbidly curious type, though, you can read the whole sordid study for free in the Journal of Natural History. As for this reporter, if anyone needs me for the rest of the day, I’ll be in the bathroom, throwing up all of the things.