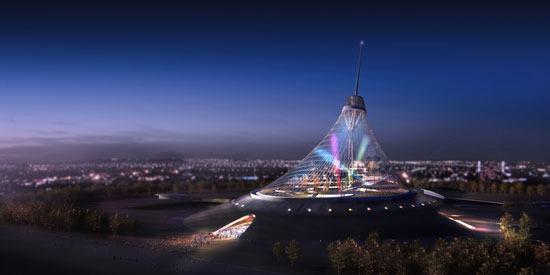 Behold, the greatest spectacle of all mankind: Khan Shatyr, the tallest tent in all the world. Wonder why I’m talking so epically about it? Well, you’ll understand if you go to the oversized tent’s website with your volume up and start browsing. I don’t know if this tent is housing fun and entertainment, leading a medieval army into battle, or being surrounded by a divine aura, but it certainly sounds and looks like it.

The giant tent stands at a whopping 490 feet tall, standing atop a giant concrete base. Four years in the making, the structure stands as the tallest structure in the entire city of Astana, the capital of Kazakhstan as of 13 years ago. The tent is made from three layers of ETFE, which is a strong transparent plastic. It allows natural light to flood the tent while still being strong enough to withstand harsh weather.

But wait a minute. Is this a tent? Let’s look at Mirriam-Webster‘s definition of “tent,” step by step.

1 : a collapsible shelter of fabric (as nylon or canvas) stretched and sustained by poles and used for camping outdoors or as a temporary building

Technically, this shelter is “collapsable” if you have a wrecking ball, and you could camp in it if you really wanted to, but it’s not made of fabric, so even making those first two stretches, it doesn’t meet this definition. What about the next one?

If every dwelling counted as a tent, this wouldn’t be the world’s tallest tent, so if we even accept this definition the claim dissipates. Also, this particular structure isn’t a dwelling. One more definition to go, and we need it to work!

3 a : something that resembles a tent or that serves as a shelter; especially : a canopy or enclosure placed over the head and shoulders to retain vapors or oxygen being medically administered b : the web of a tent caterpillar

Success! This structure is the web of a tent caterpillar! Wait, no, it’s the other one. Yes, apparently the definition that we are relying on here is “something that resembles a tent.” This is probably the weakest definition of a tent that I’ve ever read, but it’s in the dictionary. You’ve gotten away with it this time, Khan Shatyr, but don’t try to call yourself anything else that you just barely are any time soon.

Well, let’s add some more proof that it looks like a tent with MORE PICTURES from here! 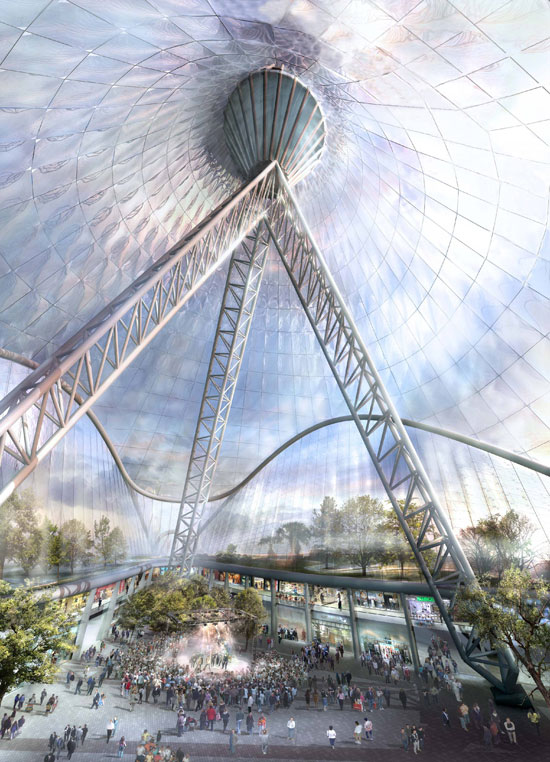 So that’s the what of it, but now the why. What is this structure actually for? Well, just about everything. It has a water park, a shopping mall, a mini golf course, a movie theater, several stages, a spa, a workout facility, a botanical garden, and a carnival area. Basically, it’s everything fun in the world, condensed.

I want to go to there.

(Via BBC News via Neatorama)