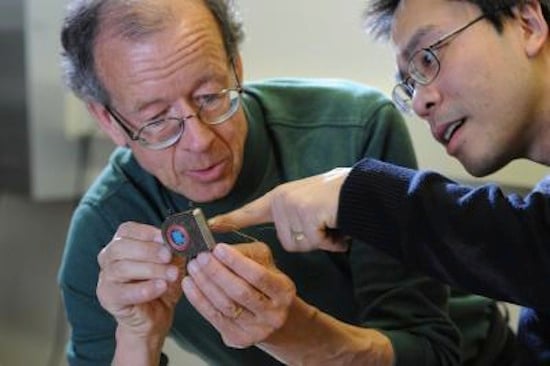 Rats aren’t the only ones getting brain implants that help them communicate this morning. Researchers at Brown University are touting the latest developments they’ve made in a neural implant developed to  improve brain computer interfaces (BCI), and while it’s not the first of it’s kind, it’s a pretty sterling example of the tech. The rechargeable, low-power implant can read activity in up to 100 neurons in the brain and then transmit that activity wirelessly as a signal that can record neural activity. One day, it could even help people suffering from paralysis control action on a computer using their thoughts.

Researchers have been using the device, which runs on just 100 milliwatts of power and can be recharged through a copper coil induction unit, in primate tests for more than a year. Right now, it is being used only for recording and analyzing neural data, but translating that data to action is the end goal of the project — and the future projects it could lead to. The results of what is described as a “brain radio” have been heartening, says Alan Nurmikko, an engineering professor at Brown who worked on the implant:

“This has features that are somewhat akin to a cell phone, except the conversation that is being sent out is the brain talking wirelessly.”

BCI implants have been on the horizon for some time, but miniaturizing the devices to the point that they can be used without tying a patient to a plethora or wires and electrical gear has proven difficult. A wireless, wearable device could make the technology much more practical for patients. While this device isn’t meant for humans quite yet, the principles that have made it successful in primates should be able to translate in large part. So while this particular implant may never make it into human testing, its descendants could help patients communicate and interact with the world when their bodies aren’t capable of doing so.