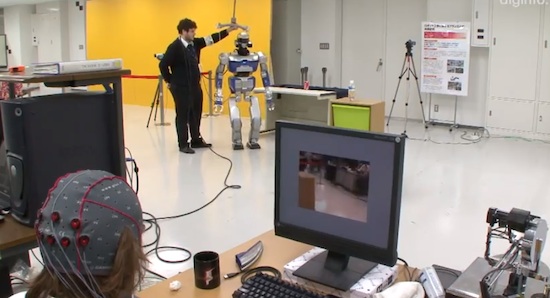 Researchers at the CNRS-AIST Joint Robotics Laboratory just released this new video of a robot controlled by human brainwaves — you think, and it acts. While it’s in the early stages, this research puts us one step closer to leaving our pitiful meat suits behind and moving to a future where be bicker and complain at one another through indestructible robot bodies. We can’t wait.

The robot is controlled using a pretty standard Brain Computer Interface (BCI). The pilot is hooked up to a computer by an electrode-studded cap that reads brain activity, and translates those brainwaves to electronic commands. By concentrating on an arrow pointing to the left, for example, the pilot directs the robot to turn left, while concentrating on the forward arrow tells the robot to walk forward, and so on. You can the the pretty impressive results in the video below

While the bugs are far from worked out in the system, that is definitely the neatest way to pick up a can of soda we’ve seen in some time. Researchers hope that the work they’re doing now could one day lead to robots that can restore quality of life to people suffering from paralysis, letting them control automatons that do chores around the house, or even take sightseeing trips to distant lands via remotely piloted robots. To which we say, that’s all great, but we want in, too.