With the Game of Thrones-Themed “Wines of Westeros,” We Can All Be Drunk Cersei

It's everything we've ever dreamed of. 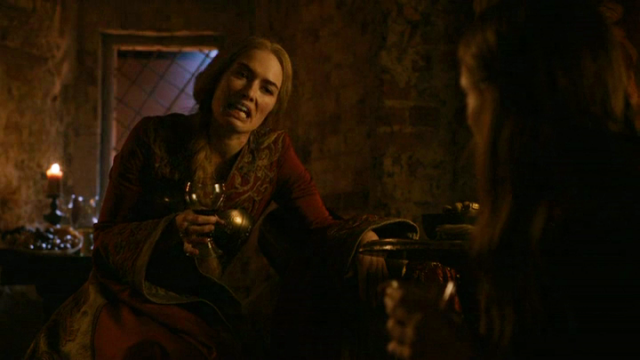 There’s Game of Thrones-themed beer and there are Game of Thrones-inspired cocktails, but what about some drink for the more refined and authentic Westerosi palette? Soon there’ll be plenty for the alcoholic Lannister matriarch in all of us. More wine, peasants!

A fan project by advertising agency Common Ventures, each bottle in the Wines of Westeros series comes with it’s own beautifully minimalistic house label. There are 12 in all (6 white and 6 red), each named after the 7 kingdoms of Westeros plus the Targaryens, the Dothraki, the White Walkers, the Wildlings, and the Night’s Watch. Reportedly, they’ll eventually cost $20 a bottle (which is admittedly more than I have ever paid for wine thanks to good ol’ Charles Shaw), but for now they’re only available to preorder.

While the wines aren’t given in-depth descriptions, it’s not hard to guess how they mapped out each flavor to their respective house. For example, the Lannisters are a pinot noir, and Wikipedia tells us that “the thin-skins and low levels of phenolic compounds [of the grapes] lends Pinot to producing mostly lightly colored, medium bodied low tannin wines that can often go through dumb phases with uneven and unpredictable aging.” That sounds pretty dead-on, if you ask me. On the other side of Westeros, the Stark’s wine of choice, Sauvignon Blanc, which Wine Folly notes is usually “completely dry.” Yup, that’s the Starks, all right.

The pre-order form can be found on the Wines of Westeros website, and they will contact you once they’re taking orders if you give them your email. Just don’t go poisoning anybody with it, y’hear?