Why Games With Female Protagonists Don’t Sell, and What It Says About The Industry | The Mary Sue

Why Games With Female Protagonists Don’t Sell, and What It Says About The Industry 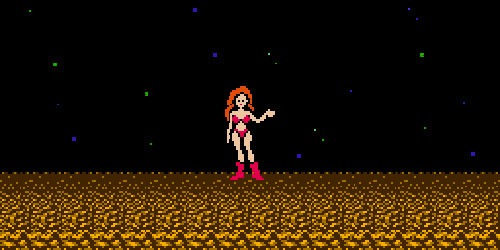 So, here’s a question: why are female video game protagonists so rare? Their absence is palpable, and we talk often of how we want to see more of them, but the why of it is typically addressed with generalizations about target audiences and a lack of women in game development. Penny Arcade Report senior editor Ben Kuchera wanted better answers than that, so he did what any red-blooded gamer would do — he found some numbers to crunch.

As detailed in an editorial earlier this week, Kuchera contacted Geoffrey Zatkin, Chief Operating Officer of EEDAR, essentially the market research firm for the gaming industry. They looked at a sample of 669 action games, shooters, and RPGs, all taken from the seventh-generation console cycle (that’s Xbox 360, PS3, and Wii — in other words, everything in the last seven years). Less than 300 games in their sample had the option of a female lead. As for female only leads…a whopping 24.

I highly recommend giving the entire article a read, but here are the highlights (emphasis added):

By looking at these trends two things become clear: games that give you a choice of gender are, on average, reviewed slightly better than games with male-only heroes, but the games that sell very well are almost all led by male heroes. If you’re funding a large-budget game and you see these numbers, you see that you lose sales by adding the capability to choose a female hero, and you lose significant sales by releasing a game with a female hero.

But don’t blame gamers for this one just yet. Though 24 games is an awfully small sample, there’s something telling about those games’ marketing budgets. Zatkin found that female-led games received roughly 40 percent of the marketing budget as male-led games. And the reason for that, as I’m sure you’ve already guessed, is a story we all know by heart.

There is a sense in the industry that games with female heroes won’t sell. “I think that there is general feeling from marketing that it’s hard to sell a mass-market game that’s a female-only protagonist,” Zatkin agreed. “This may be changing greatly with mobile and social, where you’re expanding the audience, but in core console land, there’s a lot of marketing thought that it’s hard to sell a game with a female-only protagonist in a core genre. The question is, is this something that really doesn’t happen, or do marketing budgets get gimped?”

As Kuchera wisely points out, that’s a hard call to make, given the lack of data.

Female-led games do find an easier path to get covered, simply due to their novelty in the market, and reviews tend to almost as strong as male-only games. You can find games with female heroes, such as the Tomb Raider or Portal series, but there simply aren’t enough female-led games with strong marketing budgets to see if gamers are willing to pay attention to games that tell stories with women at the center.

Where do I even start? What is there to say? I could talk about how I want to smash my head against the wall when I think of how Portal managed to surprise us with a female protagonist twenty years after Metroid came out. I could talk about how this article made me think of Assassin’s Creed III: Liberation, a game with an intriguing, awesome-sounding woman of color at the helm, whose exclusive release on a poorly-selling handheld console I completely forgot about thanks to a lack of marketing fanfare. I could talk about circular logic and player statistics and gender portrayals and all the other arguments that have been made a million times before. But while I find the things described in that article frustrating for a plethora of reasons, if I step back, I know that this problem wasn’t born in a vacuum. This isn’t something I can argue from a standpoint of gender equity or good storytelling, because at its core, it’s not about that. It’s about money, and it’s about everything that’s wrong with how the gaming industry works.

What it comes down to is that the big publishers are scared. They’re successful, but they’re young, and everyone involved is afraid of losing their piece of the pie. The reason that marketing departments won’t give female protagonists a fair shot is the same reason that more and more of the games that do get the spotlight are based around Captain White Guy McStubbleson, defender of microtransactions and champion of forgettable stories on rails. The AAA studios have found their formula for creating mountains of cash, and like everyone else in the history of corporate entertainment, they see no reason to deviate from it. Don’t get me wrong, I have a lot of big-name games in my library, and I love a blockbuster spectacle when it’s done well. Big doesn’t mean bad, and there are plenty of games from those studios that I’d rank among my favorites. But while the AAA industry isn’t slowing down, they are beginning to play things too safe. When I think back on E3, all I can remember is lying slumped on my friend’s couch, as far from the edge of my seat as possible, my eyes glazing over as I watched the endless trudge of gimmicky party games and military shooters that all looked the same.

And yet, I have a lot of hope for the future of video games. How often does a new artistic medium come around, and how lucky are we to be right here in the thick of it? The reason I remain excited is because while the big dogs are saying, “Nope, can’t be done,” the smaller studios come back with, “Wait, why not?” I’m not just talking about scrappy indie teams fueled on ramen and love. I’m thinking of Double Fine, who asked for $400,000 in development funds on Kickstarter after publishers told them that adventure games don’t sell. They raked in $3.3 million. I’m thinking of Star Citizen, whose crowdfunding campaign page stated “traditional publishers don’t believe in PC [games] or space sims.” The campaign closed this week with $6.5 million. I’m thinking of indie darlings like Super Meat Boy and Minecraft, successes that never could’ve been predicted by looking solely at last year’s bottom line. Yes, there are plenty of indie games that suck, and yes, for every Star Citizen, there are a hundred more crowdfunding campaigns that fail. That’s exactly why the big publishers are afraid to take risks (though one could argue that indie devs have more to lose). On some level, you can’t debate that point with them. I could walk into their offices and spend hours talking about why diversity in storytelling is a good thing for gaming and art and humanity as a whole, but at the end, they’d just point to their quarterly sales report and say, “But will it make this number get bigger?”

And the truth is, I don’t know. I know that most male gamers don’t have a problem with connecting to a female protagonist (just as women have managed to fall in love with games despite the dearth of heroines). I know that most gamers, regardless of gender, would like to see some new stories being told. I know that the next Call of Duty would still sell a kajillion copies even if the single-player campaign was written around a female protagonist. I know that milking popular franchises dry and delivering the same thing over and over again will eventually drive even the most loyal fans away. But these are things based in anecdotal evidence and personal impressions. They aren’t cold hard numbers, and without that, the people writing the checks won’t care. So as maddening as it is to hear the blanket statement of “women don’t sell,” nothing is going to change on that front until a big publisher takes a chance and finds the gaming equivalent of The Hunger Games. Considering how long it took the movie industry to get that far, I’m not holding my breath.

But I am putting my faith in the indies, and the crowdfunders, and the few big companies that have managed to hold onto their souls (I’m looking at you, Valve). It’s no surprise that every female–led game I’ve reviewed this year has been an indie title. That’s where new things are happening, not just with female characters, but with all characters, and with storytelling and mechanics, too. They’re not just inclined to take risks; they’re eager to. The AAA machine is losing its appeal, and an increasing number of devs are choosing to break with it entirely (Runic Games and Peter Molyneux spring to mind). Which is not to say that the big publishers should die off. They just need a reality check. My hope is that down the road, they’ll look around at all the crazy, brilliant things the smaller fry have done, and they’ll realize that you only need two things to be successful: a good game, and the willingness to support it.