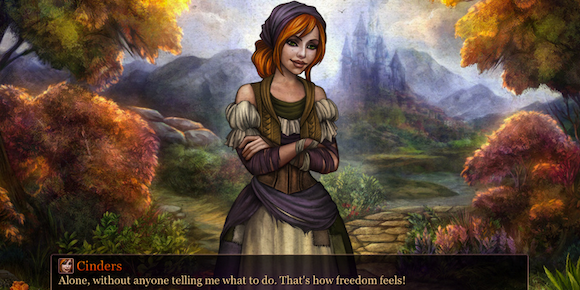 There are few things I love more in a game than player-controlled branching storylines (okay, rocket launchers, too, but that’s a different article). It’s one thing to consider the moral implications of a character’s actions in a book or movie, but the emotional punch increases exponentially when you’re the one choosing those actions. When you’ve got your hand on the trigger, the choice becomes less about how you want the story to play about, and more about what values you personally adhere to.

This sort of introspective experience is heavily present in Cinders, a new visual novel by indie developer MoaCube. The game asks the player two fundamental questions: How do you define independence, and what are you willing to do to get it? In a somewhat brilliant move, these questions are posed within the unlikely framework of a mature, pensive retelling of Cinderella. According to the devs, the moral of the original story is “be a good girl and learn to take abuse quietly, then maybe you’ll find a rich husband.” I can’t argue there, though you could also say that the tale is a fable about reaping what you sow. Good things happen to good people and bad things happen to bad people, so long as you stick it out long enough. Thankfully, neither of these themes are to be found here.

Cinders is my first foray into the territory of the visual novel, a genre that has yet to catch on in the Western market (though it does have a niche following with roots in the anime/manga scene). Think of an RPG. Now remove all of the combat, exploring, and sweet, sweet loot. Pare it down to nothing but the dialogue. That’s a visual novel. It’s an interesting style of storytelling, much like a Choose Your Own Adventure book with subtly animated images and a soundtrack. I’m more inclined to call it “interactive fiction” rather than a “game,” but as I understand those are fightin’ words for visual novel fans, I’ll bow to convention here.

All the modern incarnations of Cinderella I’ve seen — the conspicuous Disney version, the character from Stephen Sondheim’s Broadway musical Into The Woods, even Drew Barrymore’s spirited heroine from Ever After — are saintly, compliant characters. The two latter versions give her a bit more spark, a bit more backbone, but she still doesn’t aspire to anything more than what she is. Her end reward — a prince, a palace, and a heavy dose of comeuppance for her stepfamily — isn’t something that she expects or works toward, but rather something that’s handed to her. Cinderella is always portrayed as a good, kind, hard-working girl who bites her tongue and does as she’s told, despite being treated horribly. The audience is on her side because we like her and feel sorry for her, not because she’s actually got any goals for us to cheer on.

Not so with Cinders. This young woman has been dealt an awful hand, no doubt, but she’s not leaving her future up to fate. Though it’s up to the player to decide how her story turns out, Cinders’ paths are ones of her own making. I had a revelation about the archetypal story early on in the game, when I was posed with the choice of getting up early to do some extra chores (and thus garner some favor) or staying in bed and reading a book. My first inclination was to do the chores. I mean, that’s the least amount of trouble, right? We all know her stepmother’s going to come down hard if she catches Cinders reading. But then I thought about it. How does the story change if Cinderella does fight back, if she realizes that she doesn’t owe her stepmother anything and that she doesn’t have to put up with her any longer? Does that make her a less sympathetic character, and if so, why? If a protagonist gets angry and refuses to obey, does that make her any less deserving of a happy ending?

I went with reading the book.

Philosophical themes of this sort are woven throughout the game, and I have to compliment the devs on crafting a unique version of a well-worn story. There is a prince, of course, and a ball, too, but they are presented as options, rather than a definitive end goal, and Cinders’ motives for wanting to go to the ball in the first place are as varied as anything else in the game. Cinders is not a cut-and-dry morality tale, but rather a story about a woman trying hard to make a better life for herself. One of the game’s more inspired choices is to let the player pick between potential fairy godmothers (one of whom is decidedly more flesh-and-blood than the other). Nobody’s handing Cinders any favors for free. Everything has a price, and Cinders knows full well that all her choices come with consequences. I liked that, and I also liked that Cinders was a decidedly flawed character. She could be impulsive, foolish, arrogant, and downright snarky. I have to admit, there was something satisfying about finally getting to tell off the stepsisters — though their motivations, too, fell into solidly nuanced gray areas.

Though I think MoaCube should be applauded for their narrative ambitions, this isn’t a game for everybody. You won’t be required to do anything more than click your left mouse button to see new text, and even the possibility of unlocking trophies for discovering new story paths probably won’t hold the attention of gamers accustomed to a faster, more action-packed style of storytelling. And while I enjoyed the themes and plot twists, much of the phrasing reflects the dev team’s non-native English skills — which is fine and forgivable, but it’s something you should go in knowing, especially since this is a game entirely based around reading. If you’re already a visual novel fan, I can imagine that this one will be a real treat. The artwork is lovely, the music is effectively theatrical, and there are hundreds of story options to choose from. Despite its imperfections, I admire Cinders for its determined attempt to recast one of the most passive characters in all of folklore as an intelligent, self-sufficient heroine. In that much, the game succeeds.

You can purchase Cinders or check out the demo through the MoaCube website.