Daenerys Demands George R.R. Martin Tell Her Who Wins The Game of Thrones 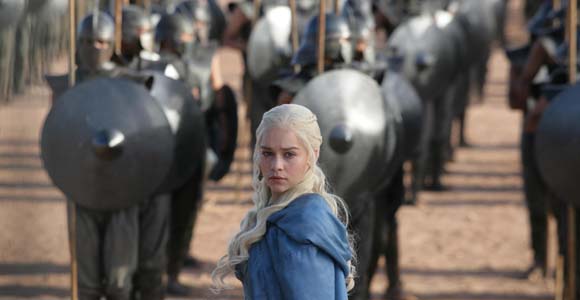 Not that I’m ready for it to end anytime soon but yes, I am anxious to know how George R.R. Martin’s A Song of Ice and Fire series ends. These characters have been through a lot and I’m rooting for more than one to “win” the Game of Thrones. But who will it be? Actress Emilia Clarke wants to know too.

Thanks to Charles Dance, who plays Tywin Lannister on the series, we know Game of Thrones will be getting a fourth season. We sort of assumed as much anyway since HBO split the third book in half for the upcoming third season but it was a relief nonetheless. It means we’re that much closer to seeing Martin’s entire book series, which isn’t even finished, translated on screen. But Clarke would appreciate it if Martin would spill everything to her about Daenerys Targaryen. She spoke with Metro News:

‘I’ve said to George ‘come on, tell me who wins, please!’ And he thinks I’m joking and I say, ‘no, no, I’m deadly serious!’’ she gushed. ‘His lips are sealed. And I’m sure that David [Benioff] and Dan [Weiss] know but they don’t tell anyone –I’ve got them drunk and they still wouldn’t tell me.

‘I’ve been pleading with them, ‘tell me who wins!’ And they won’t say a word. They’re under lock and key. ! But I care passionately about what happens to Dany. How could I not?’

If you’ve been following along with the books or HBO series, you know Daenerys isn’t the only one vying for the coveted Iron Throne of Westeros, but Clarke believes her character is different from the rest.

“I think the biggest thing about Dany is that she, unlike many of the other characters in the story, doesn’t have an egotistical desire to get the Iron Throne,” she said. “It’s not like this need or obsessive desire, it’s her destiny and there’s no control over it.”

Game of Thrones returns at the end of this month!