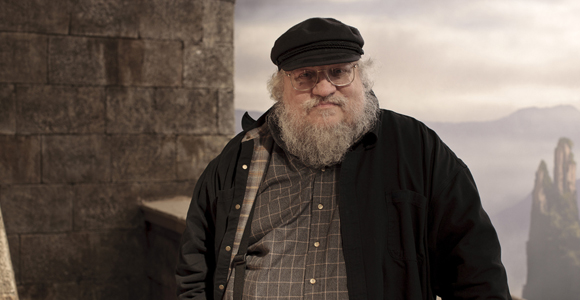 This week’s “DUH!” moment comes to us courtesy of A Song of Ice and Fire author George R.R. Martin. Fans of his work know he’s notoriously slow when it comes to writing, and Martin himself has copped to it, but with the HBO television series now in full swing, there’s a new concern. Will Martin’s novels be finished or will the show catch up before he’s done? Hear what he had to say about it after the jump.

You may be thinking Martin has nothing to worry about. He’s currently working on the second to last book and Season 3 of the show will be splitting up the third novel in the series. This means nothing. Let me explain why.

Martin’s first novel in the ASOIAF series, A Game of Thrones, was published in 1996. A Clash of Kings in 1998, A Storm of Swords, 2000. And then came A Feast for Crows…in 2005. That was basically torture for fans. Or at least they thought so until they had to wait until 2011 to read A Dance with Dragons.

Obviously a writer has to take his time to make things just the way he would like but the wait time was made even worse for fans when you consider A Storm of Swords ends on some pretty big cliffhangers and A Feast for Crows was technically only telling the story of half the cast. You had to wait until A Dance with Dragons to find out what was going on with many beloved characters you hadn’t heard from since 2000.

So with all that in mind, you can understand that even with one season of the show a year, and perhaps further books being split in two, there’s still the very real threat that Game of Thrones will reach the end of Martin’s currently published written work. He likened the pressure to a train bearing down on him.

I am aware of the TV series moving along behind me like a giant locomotive, and I know I need to lay the track more quickly, perhaps, because the locomotive is soon going to be bearing down on me. The last thing I want is for the TV series to catch up with me. I’ve got a considerable head start, but production is moving faster than I can write. I’m hoping that we’ll finish the story at about the same time…we’ll see.

Martin is currently working on the sixth book, The Winds of Winter and has one more planned after that already titled, A Dream of Spring. He’s already posted a sample chapter of the upcoming release and even read a bit of it to fans recently.

I’m working on [the next book], and a number of Ice and Fire related things at the same time. Not only The Winds of Winter, which is Book 6, but we’re also coming out with a big concordance called The World of Ice and Fire, which is about the whole history of Westeros and will be lavishly illustrated. So I’ve been filling in some of the histories of the kings who ruled 200 years ago or 500 years ago. We’ve also been doing a map book, and I’m working on a new novella about Dunk and Egg, the prequel series I have. It’s a slow process the way I write, especially books of this size that are as large and complex as they are. It’s still a slow process.

It’s not unheard of that written work isn’t finished by the time it’s adapted to film or television. Bryan Lee O’Malley’s comic series Scott Pilgrim didn’t have it’s final volume published when Scott Pilgrim vs. the World was being made. Neither was Hiromu Arakawa’s manga Fullmetal Alchemist. The anime series that followed her work eventually went off in a completely different direction and fans enjoy both. I don’t want to see this happen with Game of Thrones at all but it’s certainly a possibility. If nothing else, Martin would certainly be able to lead them in the right direction story-wise.