A Tale of Two Starships: Neil deGrasse Tyson Decides Which Enterprise is Best 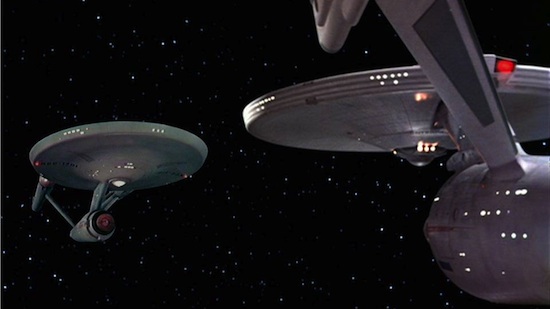 At SDCC’s annual Starship Smackdown, the final decision as to the best fictional starship came down to what is perhaps the toughest choice a nerd has to make: Star Trek’s USS Enterprise NCC-1701 or the USS Enterprise NCC-1701-A. That’s, the spaceship from the Original Series versus the “refit” from the original movies. Thankfully, astrophysicist Neil deGrasse Tyson was on hand to settle the dispute.

This was, apparently, Tyson’s first comic-con and he’d just been sitting in the audience enjoying the show. However, when the panelists failed to come up with a decision themselves and threw it open to the public, Tyson stepped up with his trademark impassioned eloquence. In the end, his statements won him the audience and the panel, the venerable NCC-1701 carried the day.

While I cannot argue with Tyson, the refit Enterprise from the movies was the one I grew up with. So while the TOS starship may have changed the face of science fiction, it’s the ship that was sacrificed in The Search for Spock that I’ll always think back fondly on.

Geekosystem reader Frederik A. wrote to kindly inform me that I had my facts wrong about the ending of The Search for Spock. Cheerfully corrected!