Galaxy Quest Once Had an R-Rated Cut | The Mary Sue

Report: At One Time, There Was an R-Rated Cut of Galaxy Quest 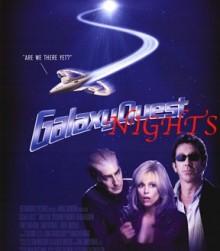 Galaxy Quest was one of those rare films that comes along with an amazing ensemble cast (Sigourney Weaver, Alan Rickman, Tony Shalhoub, Sam Rockwell, Tim Allen — I mean, come on!) and completely blows you away. For the unfamiliar, the movie was a loving lampoon of Star Trek and general geekery, and received high critical praise. Now it seems that this light-hearted comedy was once headed in an R-rated direction, with cusses and some steamy scenes.

In an article on Collider, Steve Weintraub talks about a conversation he had with Lindsey Collins, the producer of the forthcoming film John Carter. Collins recalls how she met with Galaxy Quest star Sigourney Weaver who let slip that at one time the film had an R-rated cut.

“We had lunch with Sigourney [Weaver] who was telling us that there actually used to be an R-rated version of that movie which was awesome. It was the director’s cut and it was R-rated and everybody was swearing and there were sex scenes, and the whole thing. They didn’t know what to do with it, so they had to re-edit the whole thing and made it what it is today. We were like, ‘How do we get our hands on the R-rated version of Galaxy Quest?’ She said ‘I don’t know!’ and we were like, ‘Come on, Sigourney!’ ”

While I must confess to being intrigued by the idea of a totally different, more adult, cut of the film, I’m not sure my mind can handle it. My recollections of the movie — which are 13 years old at this point — was that while it was a satire, and did deal with some adult themes, that it was fairly gentle movie. Perhaps that’s just the cheese cloth of hindsight, but I can’t really square Weaver’s story with the movie I saw.

That said, if someone anonymously mailed me a VHS of said R-rated cut, I would definitely watch it. (Hint hint!)