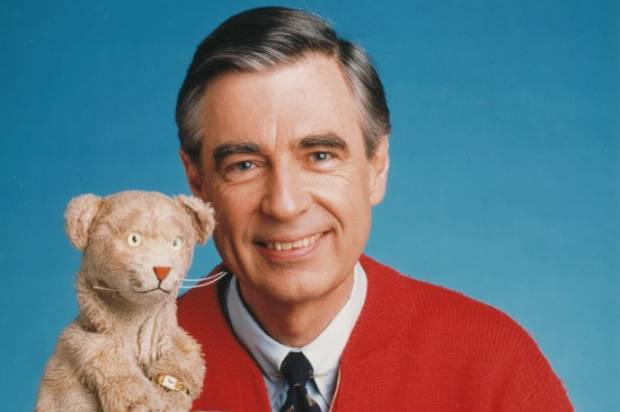 If you’re looking for political and socially-driven role models who act through kindness and consider the real, deep well-being of all humans, there aren’t that many names that come to mind, but at the very top of that list is, was, and will forever be Mister Rogers.

If, by some slip of the memory, all you remember from Mister Rogers’ Neighborhood is puppets and cardigans, Fred Rogers was a lifelong driving force for change. Not only did he spend every episode reminding children that they’re special and good, but he took on a ton of socially and politically conscious issues. He cared about animals and environmental issues, and celebrated African American youth culture. (You have seen his breakdancing segment, right?) He helped children navigate the idea of overwhelming hate and fear in the world after the murder of John Lennon, and he comforted children and adults on the one-year anniversary of 9/11.

He also, very famously, testified before the Senate in 1969 as they were considering cutting funding for the very new Public Broadcast System. In just six minutes, he pretty much single-handedly (as admitted in the moment by the leading senator) guaranteed the safety of the network’s $20 million budget.

Re-runs of Mister Rogers’ Neighborhood began airing in 1976. The show ran in syndication on various PBS stations for more than 30 years. Of the entire 20+ year long “second series” run, there were only five episodes that were taken out of rotation.

The five-episode “Conflict Series” that ran in November of 1983 has become something of a lore for the show’s fans. Airing at the height of the Cold War, the episodes center around King Friday of the Neighborhood of Make Believe, who believes a neighboring town is building bombs. Eventually, King Friday learns the town’s leader is only constructing a bridge, but only after he orders his own people to start making bomb parts and arming themselves.

The series is widely thought to have been a response to The Day After, the absolutely terrifying 1983 TV movie that posited the apocalyptic aftermath of a nuclear war. The movie actually aired about a week after the conflict series ended, but the episodes still could have been a sort of response, in that these were pervasive issues on the minds of Americans at the time that, like the movie, stirred up a lot of fear. (There was also probably a good amount of advertising and lead-up to the movie that the show could have been directly responding to.)

The last time these five episodes aired on television was reportedly in 1996. Since then, they’ve been all but lost to the world. Every once in a while, they’ll pop up on the internet. I first saw a clip being circulated last year (and some generous superfans have posted transcripts and screenshots online), but this weekend, two full episodes showed up–however briefly–on YouTube. They were quickly taken down for copyright infringement, but not before viewers could begin speculating why exactly they were posted now, unexpectedly and by an anonymous YouTuber with no other videos or even a profile picture.

Sure, the timing could be a coincidence. Or maybe it was a late birthday celebration. (March 20th would have been his 89th.)

Or maybe Trump’s proposed budget cuts (including the planned gutting of PBS), combined with his isolationist, xenophobic attitudes toward pretty much every other world leader (save one) inspired the posting.

Rogers ends the last episode of the conflict series by saying how much he enjoys making the show for kids, because by doing so, “We prove to each other and to other people that we can talk about all kinds of things, and that’s because we care about one another.” He encourages children to talk to their families about things like “war and peace, being angry and loving. That way you’ll be able to find out what the history of your family is, and all the many ways they’ve celebrated peace in their lives.”

He ended that episode telling the viewers “I wrote a little song for my father one time,” and that he wanted to sing it for us. It’s simple, and perfect.

He finished by saying, “I wish you peace.” You may know that, despite keeping the show secular, Fred Rogers was a Presbyterian minister. He chose to only focus on the tenets of religion (kindness, love, etc.), rather than specifically denominational messages. Here, though, this verse filled the screen:

And they shall beat their swords into plowshares,

And their spears into pruning forks,

Nation shall not lift up sword against nation,

Neither shall they learn war anymore.

I don’t want to necessarily say I support copyright infringement or anything, but, well… if anyone has access to these episodes (especially those last three that weren’t released over the weekend), we are a nation in need.

(via The Daily Beast, image via PBS)