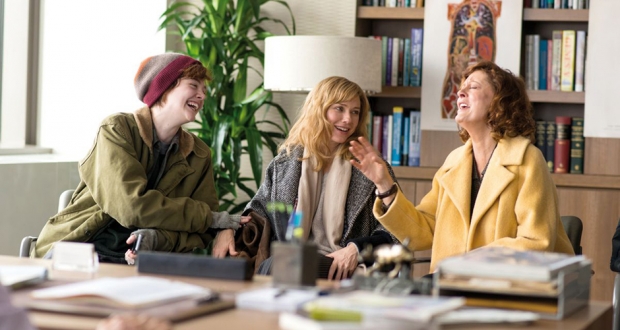 Earlier this month, we reported that The Weinstein Company, producers behind the upcoming film 3 Generations, were fighting the Motion Picture Association of America to change the “R” rating they’d given the film, fearful that this rating would prevent the young people that would benefit most from seeing it. Well, the fight paid off! The MPAA has now given the film a “PG-13” rating instead.

Here’s the official description of the film from a Weinstein Company press release:

“3 GENERATIONS follows Ray (Elle Fanning), a teenager who has struggled with the body assigned to him at birth and is determined to start transitioning. His single mother Maggie (Naomi Watts) must track down Ray’s biological father (Tate Donovan) to get his legal consent to allow Ray’s transition. Dolly (Susan Sarandon), Ray’s lesbian grandmother, is having a hard time accepting that she now has a grandson. The film follows their journey as each confronts their own identity and learns to embrace change while ultimately finding acceptance and understanding.”

The film’s original “R” rating seemed infused with not-so-subtle transphobia, as generally films with LGBTQIA content is generally seen as “adult” even when they’re about kids, and when you’re talking about transgender kids, it’s even more “taboo” for some reason. Because God forbid we don’t get kids started on their rigid gender roles early!  For example:

I tried thinking of an American film that deals with a transgender child, and … I’m at a loss. It’s a shame that up until now we’ve had to wait for films to come from other countries that are more progressive in this area, which makes 3 Generations that much more important. It’s now the first mainstream American film to deal with a trans child protagonist, as well as the first film of its kind to be accessible to the relevant age group.

This new rating didn’t come about without some edits. However, from the sound of it, the edits were handled compassionately. The Weinstein Company was guided by GLAAD and the MPAA so as to find a compromise that would keep the MPAA happy while also continuing to respect the subject matter and the film’s intended audience.

GLAAD President and CEO Sarah Kate Ellis said in a statement, “3 Generations is a film that all families should be able to see. When audiences around the world meet transgender teen Ray and see the love that his family shows him, it will not only send a powerful message to LGBTQ youth, but to families of all types. The MPAA made the right decision and once again The Weinstein Company dared to tell culture-changing LGBTQ stories that Hollywood too often shies away from.”

Meanwhile, Weinstein Company Co-Chairman Harvey Weinstein said, “It’s organizations such as GLAAD, the ones that don’t shy away from the difficult conversations, that are the reason we are able to move this country forward and really shift the cultural conversations. I spoke with Joan Graves at MPAA extensively on this and I am thrilled that we came to a solution that maintains the integrity of this crucial film while making it accessible to its intended audience.”