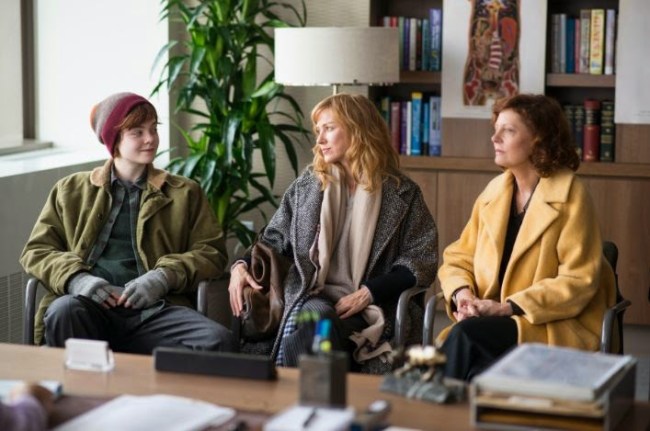 The Weinstein Company film Three Generations, formerly About Ray, is set to hit theaters in May. The story of a trans boy who is searching for his biological father, because, as a minor, he needs his permission in order to medically transition has been given an R rating by the Motion Picture Association of America. Now, the Weinstein Company is fighting that.

As reported by The Daily Dot, the Weinstein Company is appealing the MPAA’s decision, hoping that the organization will grant the film a PG-13 rating instead, so that high school-age viewers can see it.

“Three Generations is an important movie for everyone to see, especially transgender youth who are feeling isolated or fearful and their families,” Susan Sarandon, who stars in the film alongside Elle Fanning and Naomi Watts, said in a recent interview with The Guardian. “It’s ridiculous to have an R-rating which would prevent this audience from seeing the film.”

“[Director] Gaby [Dellal], Naomi, Susan and Elle made this movie to share its message of acceptance and inclusion with all generations. The fact that an R-rating would prevent high school students from seeing this film would truly be a travesty. The MPAA and I were able to come to an agreement on [2011 docudrama] Bully, and I am confident that we will be able to do so again.”

In the case of Bully, the film was given an R rating thanks to language and certain more violent moments of bullying depicted in the documentary film. However, in that case, an R rating was ridiculous when you consider that the “language” and “violence” was being spoken and perpetrated by the very age group the MPAA is seemingly trying to “protect” with this rating. The entire point of a documentary like that is to show that kind of behavior to adults and teenagers so that they are inspired to do something about it.

The R rating seems much more negative in the case of this film. Like, I’m sure there are curse words used, and perhaps that’s it. But in a time when it’s still headline news when a Disney film features a gay character, and episodes of Steven Universe are pulled because of a scene depicting two women kissing, when a heterosexual kiss would’ve been just fine for a young audience to see, it’s hard not to think that the MPAA gave this film an R rating simply because it was about a trans person. As if the very idea that trans people exist is not one that is “suitable” for a younger audience without a parent or guardian.

I’m thrilled that The Weinstein Company stands behind the message of a film like this and is fighting to get it in front of the youth that would need to see it. I agree with them on this point. However, I wish their care with the subject matter extended to the making of the film itself.

I’ve already expressed my misgivings about Three Generations director, Gaby Dellal, and her potential handling of the material based on how she’s talked about the film (like the fact that the transgender angle was shoehorned in, or the way she constantly misgendered her own character when talking about the role). I’ve also already expressed my disappointment in Elle Fanning having been cast in the lead role. Not because she’s not a great actress—she’s brilliant—but because she’s a cis actress playing a trans male role, and that really, really needs to stop.

Yes, we know all the old chestnuts about how “it’s about a trans boy who’s pre-transition, so you need a more feminine-looking person,” and “we need a name actor to sell this film.” We know those reasons, and we also know that at the end of the day, they’re just excuses. There aren’t enough trans “names” in Hollywood, because they haven’t been cultivated. At a certain point, the industry needs to start. And if you can’t get financing for a film starring Naomi Watts and Susan Sarandon that happens to have a trans teen in the lead, you’re doing it wrong.

You can cast an actually trans person and still cast a trans boy who looks feminine and can play a story like this, because the trans experience is varied and actual trans people have myriad looks, and wouldn’t you rather cast the person who not only has specific insight into a role like this, but who is generally deprived of opportunities like this?

Fighting for more people to see these stories is hugely important. Equally important is fighting for actual trans people to have opportunities in telling and performing in their own stories. We don’t need more cis people in Hollywood creating projects like this and calling it “progress.”

(via The Daily Dot, image: The Weinstein Company)