Warner Bros. Is Working On Tons Of Comic Book Films Besides Justice League 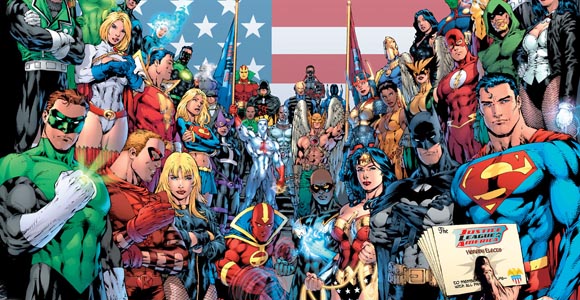 A few days ago we were thrilled to report the news that Warner Bros. was jumping back into work on a Justice League film but a new report from Variety reminds us they have tons of comic properties lined up. Some of which we may have forgotten were happening. There’s also a chance that director Christopher Nolan could play a part even after his Batman days are behind him.

Besides Justice League, Warner also announced they are back to working on a Wonder Woman film with one of the writer of the so-so Green Lantern movie starring Ryan Reynolds. That could be seen as both good and bad news for the future of Wonder Woman but it may be bad for GL from what Variety reports.

“Studio is figuring out whether to bring back Ryan Reynolds as the Green Lantern in a sequel to last year’s actioner or relaunch the character in a completely new way,” they write. “[Michael] Goldenberg (Harry Potter and the Order of the Phoenix) was brought on board in 2010 to write the screenplay for the sequel, a year before the first film bowed.”

When DC Entertainment President Diane Nelson came on board in 2009, she and studio chief Jeff Robinov halted production on all films in order to start from scratch. Wanna see what they’re currently working on?

“Those projects now join in development films based on the Flash, Aquaman, Green Arrow, Lobo, the Suicide Squad and Shazam,” writes Variety. “DC and WB are also facing a decision on how to reboot Batman once The Dark Knight Rises completes Christopher Nolan’s take on the caped crusader, featuring Christian Bale in the cowl.”

Did everyone else forget they were working on a Suicide Squad film or was that just me?

“With Harry Potter having ended its run, WB is clearly turning to DC to help launch new franchises,” writes Variety. “According to sources close to the development process, the studio learned that when making a superhero pic, it needs to tap creatives that genuinely understand the characters the way Joss Whedon was comfortable with The Avengers.”

And yes, you can bet they are keeping their eyes on Nolan. He’s finishing Batman sure, but he’s also producing Man of Steel. Variety says Warner would likely try and keep him around but that they aren’t “expected to make any concrete moves on the DC film front until after the third Batpic opens on July 20.”

We know DC Entertainment is pretty busy on the television front as well. Their animated Green Lantern and Young Justice series have been doing well on the Cartoon Network, as well as the animated shorts that accompany them. So well, in fact, that they’re bringing in a new/revamp series called Teen Titans Go! There’s also the upcoming Arrow series on the CW.

Which DC property are you most looking forward to? Which one not on the list are you waiting to see?