Teen Titans Go Returns to TV, Amethyst of Gemworld Returns to the DCU (Written by the Creator of Jem and the Holograms) 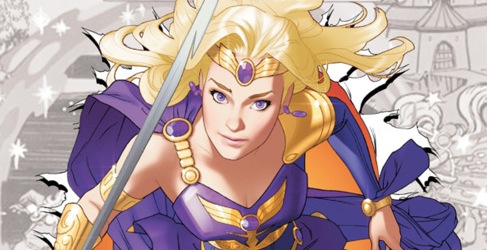 DC Comics is coming up on the year mark on its New 52 reboot, and the 52 have not gone without some pruning and additions. The third wave of the reboot is now upon us, and contains one addition we’re positively delighted to see. Not only does it resurrect a long dormant female character who most people have never heard of, she’s also in something of a genre twist for the DC universe, and her book is going to be written by the woman who created hard-rocking, kickass ’80s heroines Jem and the Holograms.

Look, just let me talk about Amethyst and Christy Marx for a bit, and then I’ll tell you about how Teen Titans is coming back to TV with its entire original voice cast.

Amethyst, Princess of Gemworld was created by Dan Mishkin and Gary Cohn as a character tangentially related to the DC universe in the 1980s, originally for the audience of young girls, though her stories took a darker tone over time. Though raised in our world, Amy Winston eventually finds out that she’s the orphaned heir to the throne of Gemworld, another dimension in which she has magical powers, and she’s the only one who can wrest rule back from the evil Dark Opal.

This new 52 Amethyst has approximately the same backstory, but has been raised in hiding in our world by her mother, and will be going up against her malicious aunt. Christy Marx, who will be writing the series, has had a more than thirty year career in TV, comics, and video games, but is perhaps most famous for creating Jem and the Holograms. Our contributor Theresa Romano interviewed her late last year, and this is what she had to say about reading and writing comics:

You love comic books, and have worked on some throughout your career. What are some comic books that have really inspired you, and are there any you’re really into right now?

I was deeply inspired by Batman as a little girl, and early on I loved the Legion of Super-Heroes, Lois Lane and the Metal Men, amongst others. When the Marvel titles appeared, I quickly latched onto those, especially X-Men, Spider-Man, Thor, Fantastic Four, Doctor Strange, etc. There were a lot of comics I loved over the years. I thought the early Love & Rockets series was brilliant. I’ve adored Elfquest from the very beginning, so it was wonderful that I was able to collaborate with Wendy for the story of Bearclaw. [Editor’s Note: you can read Marx’s Elfquest collaboration here for free, just Ctrl+F “Wolfrider!”]

I followed the entire run of Strangers in Paradise and Echo by Terry Moore; The Sandman as written by Neil Gaiman, of course. I enjoyed Hellboy, the terrific Concrete series by Paul Chadwick and I’ve been reading the Bronze Age graphic novels from Eric Shanower. Currently, I still read the X-Men and Usagi Yojimbo. Some of the things I was reading (likeEcho) have ended, so I need to find new stuff.

You also wrote your own comic book series Sisterhood of Steel, which is about strong,warrior women fending for themselves. It came out about the same time as Jem, so how would you compare those two groups of women?

I certainly love to write strong, independent female characters, no matter what the medium. The two projects are pretty far removed in every other way, though. As much as I loved Jem, it was someone else’s property, whereas I created and own The Sisterhood completely.

Marx’s Amethyst book will be called Sword of Sorcery and will launch in September.

But I know some of you are here for the news that Teen Titans will be returning to television as a half-hour series by the name of Teen Titans Go!. Teen Titans had a very popular run of three years between 2003 and 2006, and introduced a lot of kids to the DC universe. It returned in small capacity as shorts for Cartoon Network’s DC Nation programming block, but will be making a full fledged revival with a half hour comedy series (that will hopefully include a lot of action) for the block. (Needless to say… I hope this bodes well for a half hour Super Best Friends Forever show!)

And here’s one last piece of info on the DC-and-gender-representation front that we can’t go without mentionin: Becky Cloonan will be pencilling September’s Batman #12. And now I’ll turn you over to DC Women Kicking Ass for some info on just how stratospherically rare a woman doing the art on a Batman book is.