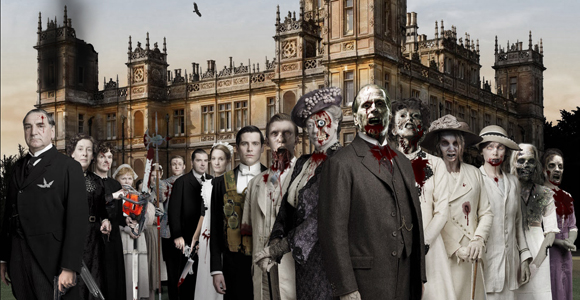 We’ll get to the story in a second but first we must give props to NotZombies.com for creating this photoshop because nothing could be more perfect for the top pic. Visit their site to see the full image and read their awesome explanations for why each character looks the way they do.

Ahem, now, click ahead to find out why Gale Anne Hurd thinks AMC’s The Walking Dead is like Downton Abbey plus thoughts on Glen Mazzara’s departure, a Walking Dead movie, and more!

Hurd, executive producer for The Walking Dead, recently did an interview with Deadline which touched on a lot of subjects. The show returns tonight for the second half of Season 3 and marks the last episodes for showrunner Mazzara. Hurd echoed what both AMC and Mazzara had previously said about the split, “Essentially with the series moving forward, he saw Season 4 in a different light than AMC did.” She also seems confident viewers won’t notice a difference in the show for a few reasons; one, the writers room remains intact and two, most of the third season was “figured out” before original showrunner, Frank Darabont, left. Meaning, the changes we thought Mazzara brought to the show were already in the works.

The interview also touched upon Robert Kirkman and how the comic creator feels about the changes made for the show [Spoilers for Season 2]. “There are a lot of times when he goes back to the comic book and goes ‘Wow, that actually would have been an interesting thing to do.’ Keeping Shane alive in season two was something he fully supported and the change-up of having Rick kill him and then having Carl shoot the zombified Shane was also something he fully supported,” said Hurd. “In the rest of season three, there were things that I can’t talk about, but same thing, that he fully fully supported.”

The return of the show also marks a conundrum for many fans, including Hurd herself. The Walking Dead and Downton Abbey are on at the same time. She said, “You always worry that people will find something more compelling to do at 9 PM on a Sunday night. But I hope that instead they’ll be sticking with us. I’m a Downton Abbey fanatic myself so I tend to tune in at Sunday nights at 9 and now I’ll be tuning in to the zombie apocalypse instead of the post-World War I English gentry.”

When the interviewer suggested they didn’t think there’s be a lot of crossover fans for the two shows Hurd said, “I like to think that we have a lot of the same type of moral issues and ethic issues that the cast has to deal with – ours is just in a heightened state.” For me, there’s no contest, it’s watch Downton live and DVR TWD because I can save time by fast forwarding through the commercials on TWD. Duh.

And what about that rumored Walking Dead movie, any chance of that? “Not right away,” said Hurd, adding it wasn’t on the table “at the moment.” But if it ever does happen, expect to see the AMC cast. “Right now, seriously, we’re focused on Season 4. If there was a movie, there are so many decisions that would need to go into it. The availability of the cast and all of that,” she said.