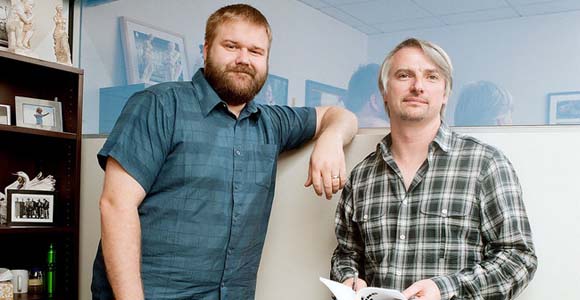 Late last year we learned AMC’s The Walking Dead was going to lose its second showrunner, Glen Mazzara. While everyone was dying to know why someone creating a successful show for the network would leave (or told to leave), Mazzara was fairly tight-lipped on the subject. To fans it made no sense and perhaps that’s why he was asked about it at a National Association of Television Program Executives panel with Damon Lindelof. Read on for what he had to say about his departure as well as how Lindelof could relate.

The decision for Mazzara to no longer work on the zombie drama was called “amicable” by AMC. Mazzara himself seemed gracious at the time saying, “I have told the stories I wanted to tell and connected with our fans on a level that I never imagined. It doesn’t get much better than that.” But we can’t help but wonder why AMC wouldn’t let him continue his successful vision.

“When people involved with the show are looking at the long-term plan, you know, they want something different. And what those differences are, you’d have to ask AMC,” said Mazzara at the NATPE conference this past week. “I was a hired gun coming in to support the creator of the show and, through odd circumstances, I ended up becoming the showrunner. I was just glad that I was able to contribute and not mess up the show, I see that as a win.”

Fair enough, though he did say Frank Darabont’s sudden departure was a “crisis.” He also added, “When you are the creator you can say this is what the show is. I didn’t create the show, I didn’t create the comic book so I was just glad I was able to contribute.”

“I don’t know what the climate’s like at that show or at AMC, there’s different culture at every network,” said Lindelof, “But I do think that there’s a bit of misconception in that if a show is doing very very well that there’s a laissez faire attitude about ‘well, they must be doing something right so we’re going to leave them alone.'”

Well, yeah, that’s how it looks like from the viewers’ point of view. The same comes into play a lot in the comic book world, creative teams of successful books are switched up and fans are left scratching their heads because they don’t realize how many cooks there really are in the kitchen.

Lindelof said, “We’re on the creative side of it but it’s a business. And the most expensive thing you can do on a television show is produce three seasons of it and get cancelled.”

The Walking Dead’s current supervising producer Scott Gimple is replacing Mazzara as of next season. The show returns February 10 for the second half of Season 3.