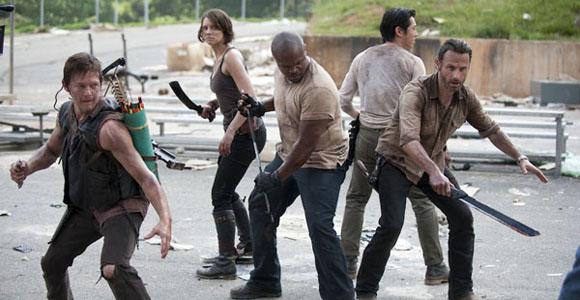 In my recap of the Season 3 premiere of AMC’s The Walking Dead, I noted an improvement from last season’s languished happenings. It seems lots of other people were willing to give the show, based on Robert Kirkman’s comic, another chance. While last season’s finale broke records for AMC, the Season 3 premiere broke basic cable records. Hit the jump to find out by how much.

According to the Hollywood Reporter, “Sunday’s season three premiere collected a whopping 10.9 million total viewers, making it the highest-rated episode in series history, up more than 50 percent from its record-breaking season two premiere. The episode now stands as the biggest telecast for any drama series in basic cable history among total viewers.”

AMC president Charlie Collier gave a statement Monday: “Thank you to the fans for making The Walking Dead such a tremendous success. We are honored and humbled that television’s largest adult audience resides on AMC. So many people on both sides of the camera worked tirelessly on this project, and I thank and congratulate each of them for their amazing contribution.”

The number jumps a bit higher when you factor in all the airings that night – 9 p.m., 10 p.m. and midnight. That brings viewers to 15.2 million total. It’s a big win for the show and the network, especially considering a chunk of their audience was attending New York Comic Con on Sunday. Not sure how much impact that really has but I, for one, was almost too tired to watch Sunday night. But the other thing to remember is DISH Network subscribers weren’t watching either.

THR writes, “The cable network’s online stream of the episode — created specifically for Dish subscribers — crashed due to overwhelming demand. The premiere is now streaming AMCTV.com”