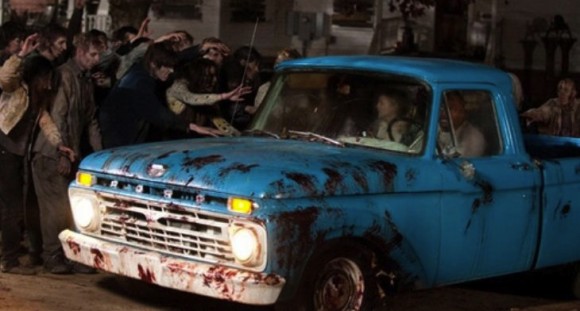 Sunday night’s season finale of The Walking Dead drew a whopping 9 million viewers, a record for AMC. A solid two thirds of that viewership were in the 18-49 age demographic, both numbers proving huge jumps since the second half of the season premiered last month. But also consider this: this happened after a big chunk of the budget was cut and in the first full season without the original showrunner, Frank Darabont. I think it’s safe to say that Glen Mazzara has more than fulfilled his duties since taking over. Also inside: More information about the casting of Danai Gurira as Michonne.

By the way, I’m going to go ahead and talk about things that happened during the second season, so if you’re saving yourself and don’t want to read spoilers, read no further.

So, this season was pretty devastating for our regular group of survivors, as well as the nice family they’d been staying with on Hershel’s farm. We lost Sophia (Madison Lintz), we lost Dale (Jeffrey DeMunn), we finally lost Shane (something regular readers of the comic were expecting to happen, plus we found out that Jon Bernthal was going to be on another new show, L.A. Noir, with — guess who! — Frank Darabont as the showrunner). We found out Lori (Sarah Wayne Callies) was pregnant, and it totally caused problems. And while the farm started out as a reliable safe haven, at least until we found out it was filled with zombies, including Zombie Sophia, a good portion of that group died too — you know, once Rick Grimes & Co. came to, um, crash. Goodbye, Otis. Goodbye, Jimmy. Goodbye, Patricia. We also know what Rick (Andrew Lincoln) found out at the CDC at the end of season one: they were all infected with the zombie virus. And now, people become zombies without ever being bit.

Okay, so the search for Sophia took a lot longer than it was supposed to. But the second season of The Walking Dead saw quite a bit of action in the end. Maybe Darabont’s departure was for the best after all. Because now, the show is breaking records left and right. First, the mid-season finale made the show the highest-rated drama on cable. Obviously, if it had been picked up for a second, then a third season, it wasn’t doing too shabby to begin with. But now, there is a big, bad zombie-loving audience out there, and AMC is, no doubt, pretty psyched about it.

And one thing fans new and old will have to look forward to is where the survivors are heading next — and all the new people they’ll be meeting. Like the hooded figure who saved Andrea (Laurie Holden) in the last scene of the finale, who we’ve confirmed is, indeed, Michonne. While she of the armless walkers is Michonne, without a doubt, the person playing Michonne in that scene was not the actress we’ll see next season. As it turns out, Danai Gurira was cast just last week. Says Robert Kirkman, creator of The Walking Dead comic and executive producer of the show:

The scene was shot — that wasn’t Danai in the costume — so we held the casting until later so it wouldn’t leak because we knew that once we cast Michonne there would be so many agents, managers and casting people that would be aware of it that it would be impossible to keep it under wraps. We waited until later to do it and worked really hard to preserve that reveal.

Kirkman says that Gurira exhibited the “strength” and “intensity” during the audition process — which did not involve swords — that other actresses didn’t, and that’s how she won the part. Before the show begins shooting in May, the actress will go through “extensive training” with the sword to fully get into the character of Michonne.

So, we have a lot to look forward to, and we’ll have a lot of new fans with whom to share it!

(via Entertainment Weekly, The Hollywood Reporter)