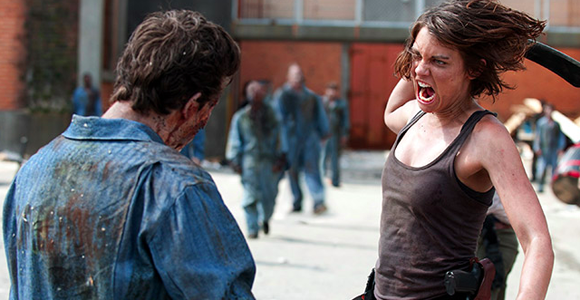 When last we saw the survivors of AMC’s The Walking Dead, they’d lost their safe haven and were on the run from a zombie horde. We were also annoyed with pretty much everyone in the cast and their idiotic decisions. So, has anything changed with the first episode of Season 3? Read on to find out.

[Spoilers ahead, of course.] If you were one of those viewers who thought The Walking Dead was more like The Talking Dead (and I’m not talking about the after-show hosted by Chris Hardwick) last season, you must have been pretty happy with “Seed” – there was no dialogue in the entire first segment. Instead, we got to see the group sweeping a house they intended to live (or at least rest) in. [Side note: when did Carl become a freaking Navy SEAL?] Unfortunately, walkers soon arrived and instead of fighting for their place, they ran.

We soon learned the survivors have lasted through the winter. Lori is very pregnant (with a terrible fake belly), they still have no idea Andrea is alive, and they are concerned about what their next step should be. Everyone seems pretty haggard. Rick is ruling with what appears to be an iron fist and no one wants to disagree with him. Luckily they stumble upon the prison we glimpsed in the Season 2 finale and quickly go to work clearing the area. They find they can take down the walkers through the fence but instead, decide to use up their precious ammo in a pretty spectacular display of shooting.

But Rick doesn’t stop there. He realizes the prison itself is a gold mine and simply living on its front lawn is a stupid idea. Unfortunately, that involves heading into some severely uncharted territory with even less ammo than they had before. On the plus side, Rick, Glenn, Maggie, Daryl, and T-Dog have become a well-oiled machine when it comes to taking out walkers. Things get a bit dicey when they come face to face with prison guards in riot gear but they soon figure out how to get around that.

Inside the prison, they face even more trouble. They’ve secured themselves an area but need to go deeper to find food, guns, and medical supplies. The cramped, dark hallways lead to a terrible walker attack that leaves poor Hershel with a bite. So, Rick chops of his leg with an ax.

There were a lot of really gross zombie bodies in this episode but that took the cake. Kudos to the effects team, though! It was such a thing to witness I think the reveal of living people in the jail was a bit underwhelming but well, there you have it.

I was almost worried we weren’t going to see Andrea or the new character, Michonne, at all but we did get a few short scenes. They felt out of place but at least they were there and people who don’t read the comic book got to see how badass Michonne is immediately. Now let’s cross our fingers it doesn’t take the entire season for the gals to meet back up with the other group.

Overall, the episode was a good one and I’m definitely looking forward to the rest of the season, but didn’t feel like a premiere. Yes, we’re establishing the new status quo but it seems they almost took the fans critiques too far and left us with too much action and no plot. We know there’s something serious going on with the Lori/Rick relationship but didn’t get to see how it devolved, and there’s a really gross Padme/Anakin thing starting with Carl and Beth that made me super uncomfortable. On the other hand, what Daryl and Carol have going on is pretty great. The prison is going to open up a whole new can of worms for the survivors and I think it’s going to be interesting to watch.

Let us know what you thought of The Walking Dead’s Season 3 premiere in the comments and we’ll see you back here next Monday for another recap!