It's not quite out of the solar system yet, but at 11 billion miles from the Sun it's certainly getting there. 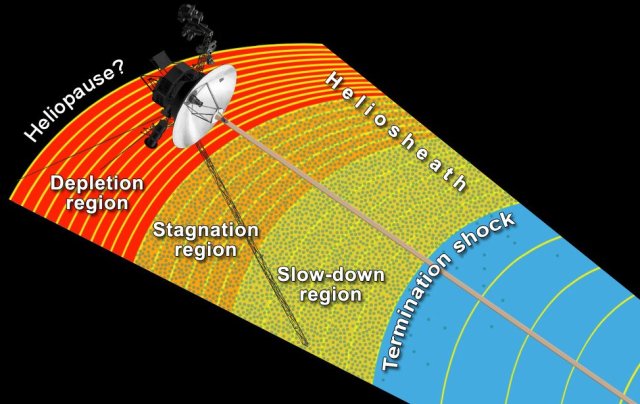 The Voyager 1 spacecraft was in the news a few months ago when it was falsely reported that it had left the solar system. It still hasn’t left the Sun’s magnetic field, but NASA says it is at the final barrier of the heliosphere. It could still be months or years before Voyager 1 crosses that barrier, but when it does it will be the first human-made craft to enter interstellar space.

What they haven’t seen is the expected change in the direction of the magnetic field, and that’s the last marker they’re looking for before being able to declare that Voyager is in interstellar space and out of our solar system.

This strange, last region before interstellar space is coming into focus, thanks to Voyager 1, humankind’s most distant scout. If you looked at the cosmic ray and energetic particle data in isolation, you might think Voyager had reached interstellar space, but the team feels Voyager 1 has not yet gotten there because we are still within the domain of the sun’s magnetic field.

It’s not certain when Voyager 1 will cross that final threshold, but the NASA scientists monitoring the craft will know it when they see it.

(via NASA, image via NASA/JPL-Caltech)