NASA Wants to Send Another Rover to Mars in 2020, We Want That Too 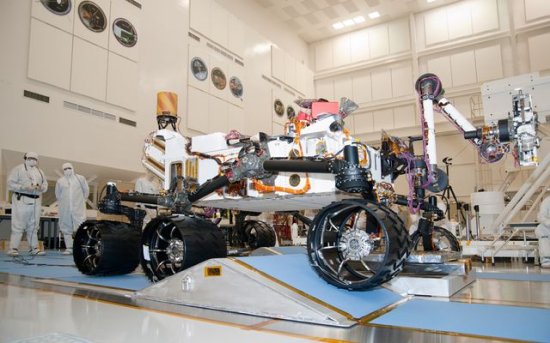 The last few days have seen a lot of exciting news coming out of the Fall Meeting of the American Geophysical Union, but this might be the most thrilling so far. NASA has announced that they plan to send another rover to Mars in the year 2020. NASA says the new rover’s launch will close out a decade of new missions. It also calls this an important step in sending humans to Mars in the 2030’s.

The new rover will fit in to NASA’s larger series of Mars missions which currently include both the Curiosity and Opportunity rovers. Next year an orbiter known as the Mars Atmosphere and Volatile EvolutionN (MAVEN) will launch, and NASA will be working with the ESA on their 2016 and 2018 ExoMars missions.

The design of the new rover will be modeled after the successful Mars Science Laboratory (MSL) architecture that was responsible for the Curiosity rover reaching Mars. The specific technology that will be on board the rover will be openly competed, complying with the Science Mission Directorate’s selection process.

As far as we know there are no direct plans by NASA for the multiple rovers to transform into a larger, Voltron-like super rover, but we also do not want to rule that out as a possibility at this point.

(via PR Newswire, image via NASA)