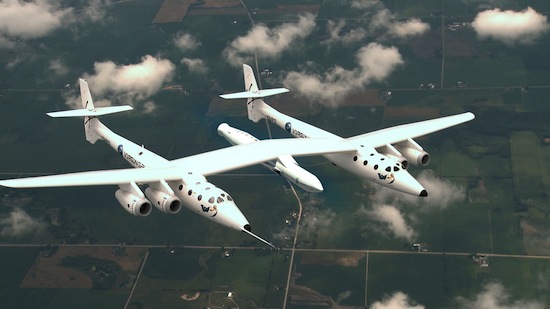 Yesterday at the Farnborough International Air Show billionaire Sir Richard Branson unveiled the latest piece of hardware for his spaceflight company Virgin Galactic. While the company has unto now made headlines for its bold plan to bring space tourism to (some part of) the masses, yesterday’s announcment was LauncherOne, an unmanned vehicle for ferrying satellites to space.

Here’s how it works: Using WhiteKnightTwo, LauncherOne will be carried aloft in the spot where SpaceShipTwo would normally reside. At a pre-determined altitude and position, WhiteKnightTwo will release LauncherOne and the unmanned craft’s rocket engine will fire. Once flying, it will cruise into space, jettison the first stage, and place a satellite into orbit.

Branson’s foray into the satellite launching business is a prudent move. For one thing, though Virgin Galactic also announced that it had taken deposits from 529 future astronauts for trips aboard SpaceShipTwo, space tourism has a limited number of people who could partake. Satellite launches, however, are in hot demand. What’s more, companies like SpaceX are providing new ways for companies to get to space.

For its part, Virgin Galactic thinks that LauncherOne is going to have a leg up on the competition. Their press release boasts that the rocket can carry a 500 pounds to orbit for under $10 million. What’s more, using WhiteKnightTwo provides a lot more flexibility for launching satellites than traditional rockets. The scheme is apparently enticing, as companies like Skybox Imaging, GeoOptics Inc., Spaceflight, Inc., and asteroid miners Planetary Resources have already signed on as future customers.

However, careful Geekosystem readers will note the strong similarity between this launching scheme and the Pegasus rocket. Originally developed in 1994 with help from Burt Rutan, who would later design much of Virgin Galactic’s craft, the Pegasus is also launched from an airplane. It, however, boasts a 980 pound payload — nearly double that of LauncherOne. Though its first launches cost a mere $6 million, that figure has since swelled to about $30 million for an all-expenses-paid launch.

Comparatively, that gives Virgin Galactic a pretty major price advantage. In addition to LauncherOne, Virgin Galactic also announced that Surrey Satellite Technology and Sierra Nevada Space Systems would be creating generic satellites designed specifically for LauncherOne. This would remove at least some of the difficulties of using such a low-weight launch vehicle, but it’s not clear if the cost of those designs were included in the $6 million figure.

While LauncherOne might not be a new idea, it may prove attractive enough to net some valuable contracts for Virgin Galactic once the LauncherOne enters service sometime in 2016. This could very well take the fledgling space company from being a billionaire’s hobby to a full-fledged industry player. However, it will at the very least make getting into orbit just a little bit easier.