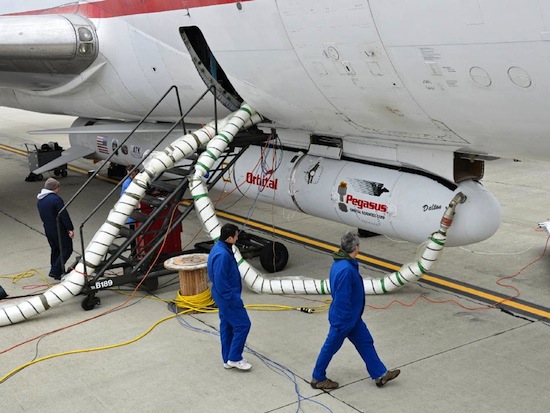 NASA is preparing to launch the Nuclear Spectroscopic Telescope Array, or NuSTAR, next week. Once in orbit, the probe will focus on high energy X-Ray emission, eventually surveying distant black holes. The probe will be a major boon to astrophysicists, but only after it’s in space. And it’s going to get there after being shot off a freakin’ airplane.

The airplane in question is a modified Lockheed L-1011 TriStar called the “Stargazer.” The rocket in question is the Pegasus XL, which has been used since 1990 to send small satellites into space. It works a little like a cruise missile: The Stargazer takes off (in the case of NuStar, from the Vandenberg Air Force Base), then releases the Pegasus at a predetermined altitude and speed. Free of the aircraft, the first stage rocket motor starts up, and the craft is on its way to orbit.

Though the Pegasus is a bit of a costly launch option on a dollars-per-pound scale, it’s exceptionally good value for lifting small satellites. What’s more, it’s a particularly useful method for putting craft in orbit over the equator. Fortunately, the NuSTAR is a small satellite that needs to be close to the equator.

NASA is shooting for a June 13 launch, weather permitting of course. The NuSTAR is expected to be an invaluable tool once in operation, and it’s going to have a pretty cool start as well. And though we’ve been launching satellites from airplanes for a while now, this is just a pleasant reminder that it’s a cool concept.