Vin Diesel For Guardians of the Galaxy? Casting Rumors Abound!

We knew that Vin Diesel was in talks with Marvel for something, but this news is still unexpected: It is rumored that Diesel will be playing Groot, the sentient ent-like tree alien, in the upcoming film Guardians of the Galaxy.

Wait, what? Head under the cut for details to find out more!

Earlier today, Diesel posted a captionless pic of Groot up on his Facebook page. For a while the drawing from the GOTG comic stood as his cover page before being taken down and then disappeared all together from his public timeline.

Here is the picture in question: 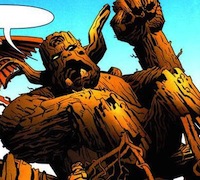 So is that evidence conclusive? Well, no. But it certainly suggests pretty heavily that our Groot is, in fact, Diesel.

At SDCC last month he mentioned the talks with Marvel again in the Riddick panel but refused to divulge any details. The first picture he had posted was of him standing next to an Avengers comic book cover, so the initial speculation seemed to suggest Age of Ultron more than Guardians, but I’d say this new development makes sense. We’ve been getting steady information about casting and the initial filming for the 2014 release, anyway. With many of the main cast (Zoe Saldana, Lee Pace, John C. Reilly, Karen Gillian, Glenn Close, et cetera) the two primary parts still awaiting actors are Groot and Rocket Raccoon– and it seems now we are only waiting on the voice casting for the latter.

It’s worth mentioning a key element to the character: “While hyper-intelligent, the alien seems to only ever say the line ‘I am Groot’ over and over to those who cannot hear his real voice.”

Yup. If true, Diesel will probably only ever say “I am Groot.” That reason alone is why some are discounting this rumor as the actor trolling the ever-attentive Marvel fanbase, but we can’t know for sure.

Considering that Groot is most likely going to be completely CGI-animated I doubt we’ll see Vin Diesel on-screen in the flesh, but it’ll be interesting to see how he fares as sentient foliage. It’s certainly a character leap from Fast and Furious or Riddick!