Is The Venus Express Probe Watching Volcanoes Erupt On The Planet As We Speak? 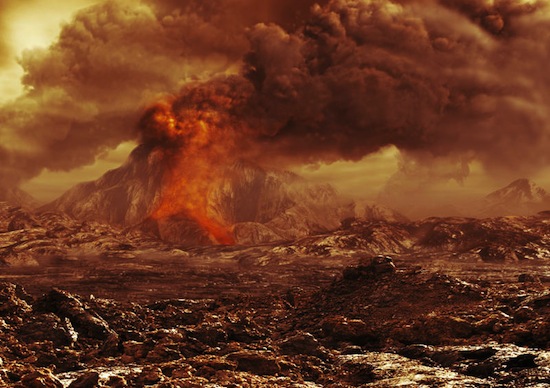 Scientists at the European Space Agency (ESA) are seeing increased levels of sulphur dioxide in the already rather poisonous atmosphere of Venus. There are a couple of possible explanations for the spike in levels of the gas, but right now, we’re going to get excited about the coolest possibility, which is that the ESA’s Venus Express probe is seeing the results of some not insignificant volcanic activity on the surface of the planet.

Venus Express, which has been keeping tabs on the planet for six years now, has seen increased measurements of sulphur dioxide in the densely cloud-covered upper atmosphere. That might not seem like big news — after all, levels of the poisonous gas are already as much as a million times higher than they are here on earth — but it does demonstrate that that gas has to be coming from somewhere. Now, researchers think that they may be seeing the results of increased vulcanism on the planet that are spewing forth sulphur dioxide.

Of course, it’s possible that the increased levels are signs of something more pedestrian, like changes in wind and weather patterns lower in the atmosphere, for example. if we have the opportunity to believe that we are watching volcanoes on another planet, though, we are going to choose to believe that for the moment. We are also going to say that maybe we should get a better peek at that sort of thing? Because it sounds 100% awesome.

(via RedOrbit, image courtesy of ESA)