Energy Company To Hydrofracture Volcano For Geothermal Power, Because That Sounds Safe, Right? 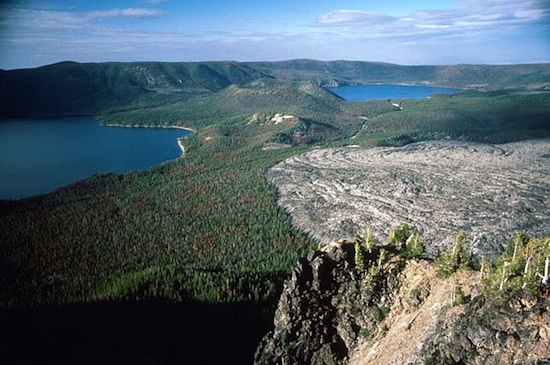 Does pumping water at a very high pressure into cracks in a volcano to break up the bedrock around it and release heat from the earth sound like a safe thing to do? If it doesn’t, you must not work for U.S. Bureau of Land Management (BLM), because that’s exactly the process the agency just greenlit.  Seattle-based AltaRock Energy recently got permission from the BLM to hydrofrack the ground around Oregon’s dormant Newberry Volcano, because there’s no way that could possibly end badly.

AltaRock’s plan is to break up the rock surrounding the volcano by cracking it apart with high pressure water — and the many other substances that go into fracking — to make the geothermal heat contained in those rocks easier to access. That heat will be used to boil water, the steam from which will turn turbines that generate inexpensive, clean electricity. That’s a noble goal if we ever heard one, and we’re all on board. Except for the part where you are hydrofracking a volcano, people. Despite independent studies suggesting that the fracking is unlikely to trigger an earthquake, that part scares the bejeezus out of us, because we are really quite crap at predicting earthquakes, and we don’t understand what about the fracking process seems to set them off.

We’re all for alternative forms of energy, and geothermal has some promise, but man, pumping highly pressurized water into a dormant volcano? That just seems like the according to Hoyle definition of “poking the bear.” Except, of course, that in this scenario, the bear is a mountain that shoots rocks and fire and also rocks that are on fire, which makes our exceedingly short list of Things That Are Way More Intimidating Than An Angry Bear. In fact, it is probably right at the top of that list, because you know, volcanoes. Fire, lava, explosions, general “wrath of a living and vengeful Earth” kind of vibe.

We’re not knee-jerk anti-frackers over here. Rather, we stand in that uncomfortable middle ground who believe that while fracking has the potential to be less rough on the environment than a lot of other methods of gathering energy, its still a fairly young technology, and its consequences are still too ill understood to put it on the fast track. Maybe we shouldn’t be playing around with it near volcanoes until we have a better grip on the what link there may be between fracking and tectonic activity? That seems like a pretty good reason to move slowly on this, right?