French Thieves Use Vacuums to Suck Thousands from Safes 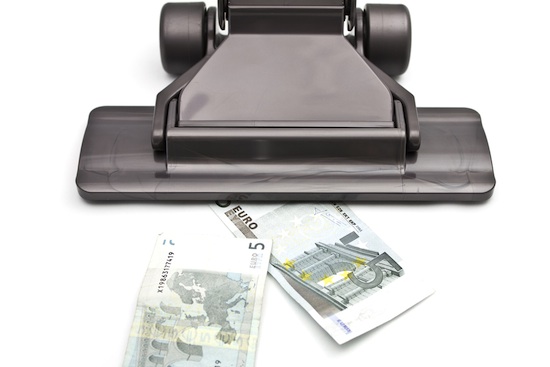 At first I was skeptical about this seemingly unbelievable story because I heard about it in The Sun, but it’s being widely reported upon by the French media: A group of thieves known as the “gang à l’aspirateur,” or “vacuum gang,” have figured out a devious way to rob French supermarkets — specifically, Monoprix supermarkets — using just a drill and a powerful vacuum cleaner. On Monday, they robbed one Monoprix near Paris to the tune of 70,000 Euros, bringing their total number of robberies up to fifteen since 2006.

The key to the thieves’ nearly uninterrupted streak of success, per French reports, is the way that Monoprix delivers money from the checkouts to its safes: Envelopes of cash are funneled in via pneumatic suction tubes. Whereas breaching the safe itself might be considerably difficult, requiring explosives or safecracking, the thieves realized that if they just drilled into the delivery tubes near the safebox and hooked up a powerful vacuum, they could suck the money out and get at it much more easily.

These thieves have discovered a particular kind that there was a flaw in the system for channeling funds into the safe of Monoprix, said a source familiar with the matter in the columns of Paris. To put it directly into the coffers of cash, cashiers using pneumatic suction pipes, where they slide tubes filled with money. The robbers realized that it was sufficient drilling a hole in the pipe near the trunk, then connect a powerful vacuum cleaner to capture the money stored. They no longer have to deal with the shield.

Monday’s heist netted them 150 cash envelopes in this manner. According to The Sun, the thieves were caught on CCTV, but they couldn’t be identified, as they were wearing ski masks. This latest robbery brings their total haul up to nearly 600,000 Euros ($800,000) since 2006.

(via Le Monde and Le Parisien. h/t The Sun via Slashdot.)